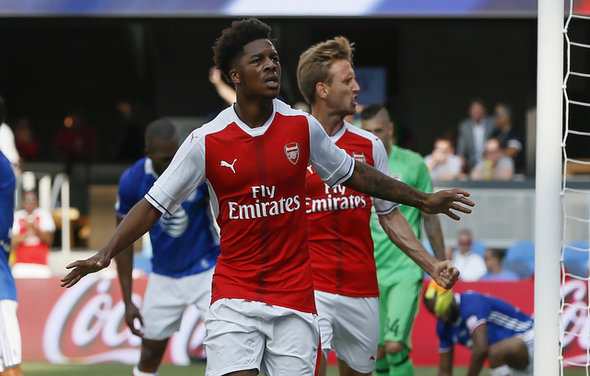 Leeds are the firm favourites to sign Arsenal striker Chuba Akpom this summer, according to the latest bookmakers’ odds.

Ladbrokes have placed odds of 7/4 on the Yorkshire giants signing the 21-year-old Gunners forward ahead of the August 31 transfer deadline.

Former club Hull and recently promoted Millwall trail in second place with a price 11/4, while newly crowned Premier League team Brighton are sat on odds of 3/1.

Akpom was once highly thought of in the Arsenal youth ranks and signed his first professional contract with the club in October 2012, a day after turning 17.

However, he has made just 10 senior appearances for the Gunners in total, failing to find the back of the net on any of those occasions.

The rest of Akpom’s time at Arsenal has been spent out on loan to various Football League clubs such as Hull, Nottingham Forest and Coventry.

His most recent move saw him spend the second half of the last campaign at Championship runners-up Brighton, but he once more failed to score in 10 outings for the club.

Leeds, meanwhile will be looking to get started with their summer recruitment after the appointment of Thomas Christiansen and they may see Akpom, who has two years remaining on his contract as a player with plenty to offer still.

In other Leeds transfer news, a reliable journalist has provided an update on the situation of Whites 23-year-old.