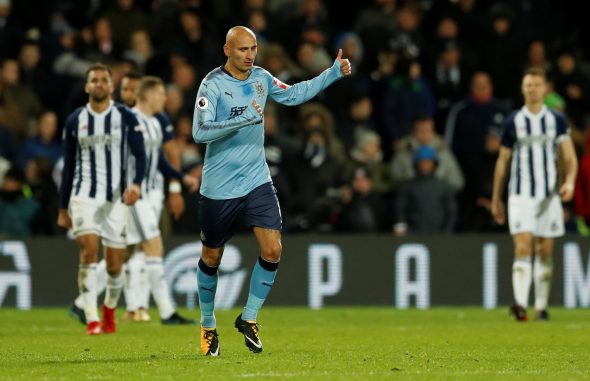 West Ham are firm favourites to secure the capture of Newcastle United midfielder Jonjo Shelvey in January after bookmakers slashed their odds.
The Hammers were named by Sky Bet as 4/1 favourites to secure the central pass master’s signing at the end of 2017, but Ladbrokes are now offering odds of just 11/8 for the 25-year-old to join the east London club before the end of the current transfer window.

David Moyes’ men are miles out in front of their rivals, with Southampton priced at 20/1 and both Shelvey’s former side Swansea City and top four hopefuls Tottenham handed odds of 25/1 to snap up the six-cap England international.
Shelvey, who helped Newcastle pick up the Championship title last season to secure their return to the top flight, has had a mixed season so far, having seen himself sent off for a stamp on Dele Alli on the opening day of the current campaign, as well as receiving two yellow cards against Everton.
With 17 top flight appearances under his belt, he has failed to contribute a single goal or an assist, although he did find the back of the net in the club’s 3-1 win over League Two side Luton Town in their FA Cup meeting.
He joined the Magpies from Swansea back in the January window of 2016, and has a total of 80 appearances to his name for the club.
In other West Ham news, the club have opened talks over the transfer of a powerhouse forward with European title holders.
We’ve launched a << BREAKING NEWS FEED>> exclusively for your club. ‘Like Us’ on Facebook by clicking here if you want 24/7 updates on all West Ham breaking news.