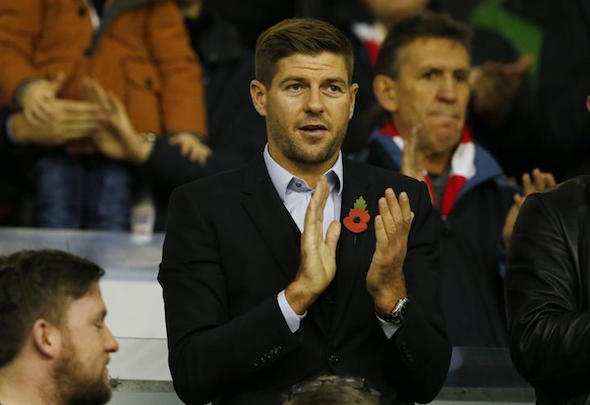 Celtic are the bookmakers’ favourites to sign Steven Gerrard when he leaves LA Galaxy.

Reports in Scotland have claimed new Parkhead manager Brendan Rodgers wants to lure the Liverpool legend from the US in what would be a sensational move.

According to bookies Ladbrokes, the odds of Gerrard signing for Celtic this summer as a player are11/8, while a move to Celtic as a coach is slightly longer odds at 6/4.

The Scottish Sun claim Rodgers is weighing up a swoop for the Liverpool legend to take on a player-coaching role at Parkhead next season.

The northern Irishman wants Gerrard, 35, to be his dugout number two and also bring his pedigree to the Celtic midfield.

Gerrard, who ended his 17-year spell at Liverpool in May 2015 after one of the greatest careers in the club’s history, is under contract to MLS side LA Galaxy until December.

It is said he could be tempted by an offer of a first coaching role as the former England captain has been open about his ambition to move into management when his playing career ends.

“With Gerrard looking a certainty to return to Britain it now seems he has two simple decisions to make; Celtic or Liverpool and playing or coaching,” said David Macdonald of Ladbrokes. “At the moment the odds narrowly favour him putting on his boots again for Rodgers in the Ladbrokes Premiership over a return to Anfield.”

Rodgers was appointed the new Celtic boss on Friday afternoon after getting the job ahead of the likes of David Moyes, Roy Keane, Malky Mackay, Neil Lennon and Mick McCarthy.

Boyhood fan Rodgers jetted to London on Friday from his holiday pad in Majorca to meet up with Celtic chief executive Peter Lawwell and other high ranking club representatives and formally put pen to paper on his contract.

The 43-year-old had already twice met with majority shareholder Dermot Desmond and verbally agreed to being Celtic’s 18th manager in 128 years.

Deila, who bowed out with a resounding 7-0 win over Motherwell on Sunday, announced last month he was standing down after two seasons despite leading the Hoops to their fifth successive title.

There have been calls for the newly-crowned Scottish champions to spend £20million on new players in a bid to reach the Champions League group stages.

But Parkhead chief executive Lawwell insisted the club will not spend beyond their means and take on debt.