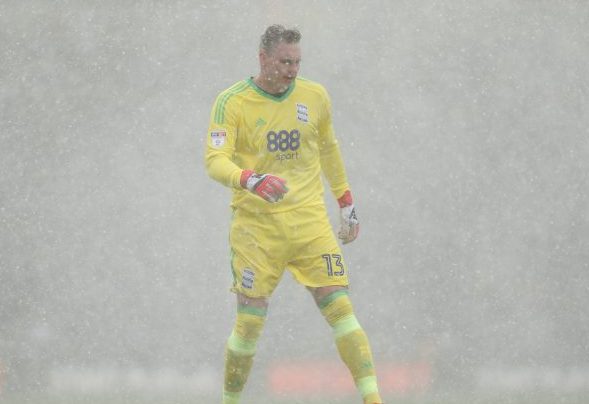 A section of Leeds United supporters took to social media to vent their disapproval at the possible arrival of goalkeeper David Stockdale.

As reported by the Yorkshire Evening Post, the 32-year-old is reportedly close to joining Elland road on loan with a view to a permanent transfer, after an offer was made to his current club Birmingham City.

New boss Marcelo Bielsa is currently on the market for a new goalkeeper, after previous first-choice goalkeeper Felix Wiedwald was sold on the Argentine’s arrival at the club.

One supporter tweeted to express his anger at the possibility of Stockdale joining the club, with the fan of the opinion that there are better options on the market at the moment.

Football Insider has rounded up the best tweets from a section of Leeds supporters about potentially signing Stockdale:

Missing out on angus Gunn and getting stockdale instead🤮🤢🤢 big loss/mistake!! He’s not wanted by Birmingham only reason leeds want is cos he’s a Leeds fan! So error prone it’s unreal!! #lufc

If Stockdale wasn't #lufc would anyone want him? struggled a bit last season right?

Gunn is a cut above Stockdale, for you fans who claim the latter is better than the former, you need to start watching football matches. One is being released by Birmingham, who were battling relegation, the other is training with the World Cup squad, think about it.#LUFC

Although some fans are unhappy at the prospect of David Stockdale joining the club, he’s vastly experienced at this level and that is just what the club needs at the moment. It would be unfair to rely on 21-year-old Bailey Peacock-Farrell for the whole season, that’s a lot of pressure for a young goalkeeper to be under. Although Stockdale did make some mistakes last season, let’s not forget that he was involved in a relegation scrap and had to face a lot of shots, hopefully the Leeds defence will be able to give him a bit more protection than Birmingham City’s did.