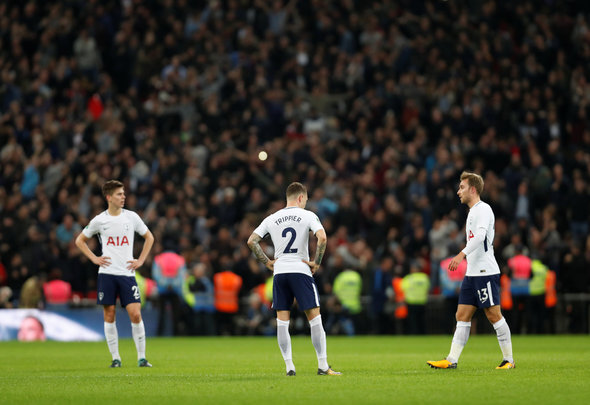 Sky Sports’ Sunday Supplement panel say that Tottenham are sitting where they should be in the Premier League table and believe higher ambitions are driven by the supporters’ “desperation”.

Mauricio Pochettino and his men are currently sitting fourth in the top flight, behind table toppers Manchester City, second placed Manchester United and Chelsea, who are two points ahead of Spurs after drawing with Liverpool on Saturday.

The Lilywhites were also forced to settle for a point at home to West Brom, with recent results in the league having seen them go from joint second with United to five points off Jose Mourinho’s side, and 10 points adrift of City ahead of their clash with Huddersfield on Sunday.

However, despite seemingly have held title aspirations at the start of the season, having been involved in the last two battles for the Premier League trophy, the Sunday Supplement panel, made up of The Sun’s Shaun Custis, The Times’ Matt Dickinson and The Guardians’ Dominic Fifield, believe fourth is still a major achievement considering their expenditure compared to their rivals.

Speaking on Sunday Supplement (26/11, 09:30) on Sky Sports, Custis said: “Top four is what they should be concentrating on. They’re still a good side.

“From the fans point of view, there is perhaps a bit of desperation that they must push on, challenge for the title, because ‘If we don’t this year we may lose Harry Kane or Dele Alli’.”

Meanwhile Dickinson said on the show: “This is down to expectation management. They’ve pushed for a couple of titles, and the bar has now been raised.

“They are fourth, which is, if you go through spending power, budgets, wages, that’s higher than they should be anyway.

“It’s not a shock that Spurs are in fourth place, but expectations have risen.”

There have been many rumours surrounding the future of some of Spurs’ stars considering their nominal wages in comparison to league rivals, and Fifield believes that their approach to spending could prove to be their downfall.

“They will get players, elite players, to a certain point, where they feel they can earn twice as much money at a rival club,” he told Sunday Supplement.

“The wage structure is admirable in terms of its business reasons, but it’s not ambitious in the context of the Premier League.

Spurs will be hoping to claw their way back into the title race when they visit the King Power Stadium on Tuesday to take on Leicester City, who drew with West Ham in their last outing.

In other Tottenham news, Pochettino has delivered a hammer blow on the club’s chances this season.