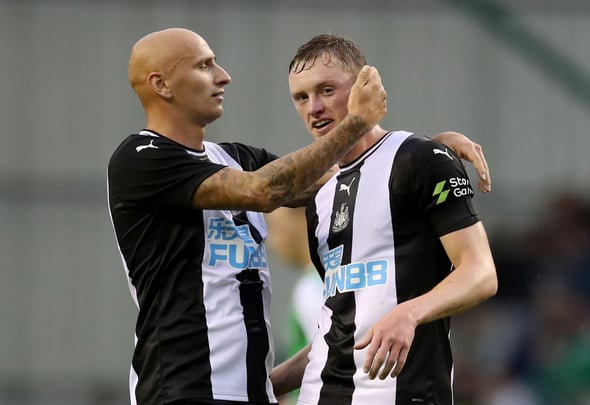 Darren Bent says that Jonjo Shelvey is the only player at Newcastle United who has any “real quality” and insisted keeping him fit is crucial to their survival hopes.

Speaking exclusively to Football Insider, the former Sunderland and England striker revealed he was impressed with the midfielder’s performance against Arsenal, hitting the post with a fierce strike before coming off with a minor injury.

The Gunners left St James’ Park with all three points courtesy of a Pierre-Emerick Aubameyang strike in the clubs’ first Premier League game of the season.

Bent singled out Shelvey as Newcastle’s top performer and suggested the 27-year-old’s fitness could made a big difference in their battle against the drop.

Bent told Football Insider: “I like Shelvey, he came close with a bit of magic when they hit the post.

“For them, he is the one player in their squad who has real, real quality. It’s just whether he can stay fit again. Steve Bruce, if he sees something in him, he’ll get on him .

“If they can keep him fit, that would be a big, big help.

Shelvey suffered a difficult 2018/19 campaign as a result of injury, former boss Rafael Benitez making use of Isaac Hayden, Sean Longstaff and Mohamed Diame in the middle instead.

Operating a 3-5-2 formation, Bruce stuck Shelvey, Hayden and Longstaff alongside each other in the middle of the park, with Matt Ritchie and Javier Manquillo operating as wing-backs.

In other Newcastle United news, Bent has told Football Insider of another man crucial to the club’s hopes of survival this season.