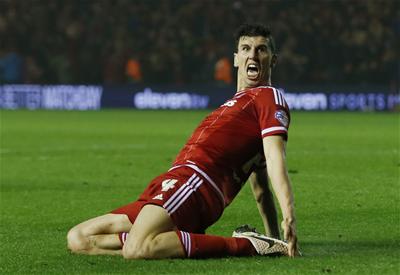 Middlesbrough have offered £15million-rated defender Daniel Ayala a new contract to fend off interest from clubs home and abroad, according to a report.

The Sun claim the newly promoted Premier League club have moved to tie the centre-back down to an extension ahead of their return to the top flight.

The Daily Mail claimed last month that Newcastle have made a move to sign the highly-rated Spaniard following his excellent campaign in the Championship.

It is said Boro have been approached by Newcastle for the classy 25-year-old, who was named in the Football League Team of the Season.

Rafael Benitez was promised a large transfer budget when going into the summer after suffering relegation to the Championship.

The Spaniard will be looking to bounce back to the Premier League at the first time of asking, and he has pinpointed former Liverpool man Ayala as a key target.

The Spaniard was an integral part of Middlesbrough’s defence as they won promotion to the Premier League in the recently completed domestic season.

Ayala was signed by Benitez at Liverpool in 2007 and the ex-Real Madrid boss is reported keen to work with him again.

Since Newcastle’s links to Ayala, Middlesbrough have slapped a huge asking price on the head of their Spanish defender.

The Daily Mail claim that Boro want a £15million fee for Ayala, which may deter Newcastle from making an offer.

However if Ayala wants to work for his former manager again, then he might decide to push strongly for a move.

In other Newcastle news, a 26-year-old has told the club he wants to quit and reveals where he could be heading.