Chris Sutton and Pedro Caixinha clashed live on TV as they argued over the Rangers manager’s claims that he has the “best squad” in Scotland.

A double from Alfredo Morelos and a late goal from Eduardo Herrera helped ease the pressure on Caixinha as the Glasgow giants won 3-1 against Ross County on Sunday afternoon.

But the manager was in the spotlight soon afterwards as he verbally rucked with ex-Celtic striker Sutton over the calibre of the team he has assembled.

Caixinha has completely overhauled the Rangers squad this summer but critics have claimed it is no better than the side that had a wretched 2016-17 campaign.

The Portugese was interviewed shortly after Ranger’s triumph at Dingwall by BT Sport host Darrell Currie, which prompted a clash with Sutton, who took the manager to task over his previously stated belief that he has the best group of players in the Scottish Premiership.

“I don’t care about Celtic!”

It got tense between @chris_sutton73 and Rangers manager Pedro Caixinha… ???? pic.twitter.com/fV0tjXrRHq

Sutton said, as quoted on BT Sport’s post-match live coverage: “Pedro, well done today. Do you honestly believe though that you have the best squad in Scotland?”

The Portuguese coach initially appeared bemused by the questioning, and hit out at Sutton’s short career in management as things got heated.

Sutton, who had a brief spell in charge of Lincoln City, kept his cool as he replied “just one” before asking: “Which of the Celtic players wouldn’t get into your team?”

Caixinha said: “I’m not comparing my squad with any sorts of other squads, I don’t like that.

“When I have one squad, even if I’m a manager from Ross County, I will say I have the best squad and I have the best players because I believe, I trust in myself and I work with them on a daily basis.”

However, Sutton, 44, appeared unconvinced by Caixinha’s answering as he questioned: “So you don’t believe you have the best squad?”

Clearly irked by his remarks, Caixinha reacted: “I believe, that’s why I’m saying that, I believe.

“I don’t care about Celtic, I care about Rangers. I’m the Rangers manager, I’m not the Celtic manager.”

Rangers legend Ally McCoist, who was on punditry duty alongside Sutton, then stepped in to cool tensions as he moved the topic on by asking about the club’s away form. 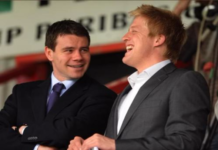