The Celtic board have ended the Brendan Rodgers deep freeze by publishing a shock interview with him on their official website.

Relations between club chiefs and the architect of the treble treble were acrimonious after Rodgers walked out in the middle of last season to take charge at Leicester City.

A Celtic source has told Football Insider that the northern Irishman was “very much persona non grata” in the boardroom and he has been given the cold shoulder for more than a year.

But time is proving to be a healer and Hoops chiefs have showed relations have thawed with Rodgers by allowing the publication of a lengthy interview with him hailing their ninth consecutive league title.

Unsurprisingly, it is gushing and features warm appraisals of the likes of Scott Brown, Callum McGregor and James Forrest.

It also shows a significant degree of class and forgiveness from the Celtic top brass.

Senior officials had been furious at the manner of Rodgers’ departure and were adamant he would not use his excellent relationships with their top stars to lure them to Leicester.

Led by Peter Lawwell, the board resisted a concerted bid from the Foxes to sign McGregor last summer as well as less overt moves for Kieran Tierney, who eventually joined Arsenal, and Forrest.

Leicester have been strongly linked with Odsonne Edouard and Kristoffer Ajer this summer. 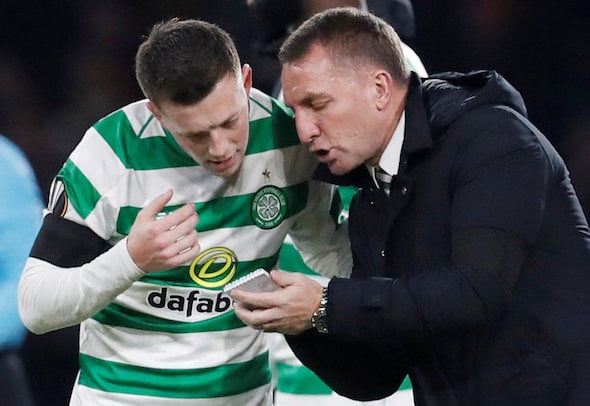 Both are bona fide Rodgers targets and currently appear the most likely of Neil Lennon’s senior stars to leave in the upcoming window.

It remains to be seen whether Celtic will be willing to negotiate with Leicester and Rogers on transfers, but the first obstacle appears to have been removed.

In other Celtic news, the updates on club’s pursuit of Fraser Forster can be REVEALED here.