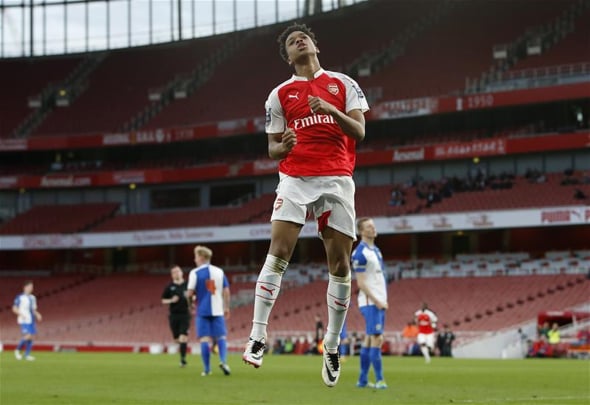 Celtic chiefs have earmarked Arsenal starlet Chris Willock as a replacement for the outgoing Patrick Roberts, according to a report.

The Mirror has claimed that the Hoops have identified the Gunners 19-year-old as a possible Roberts replacement when the on loan attacker’s loan deal expires at the end of the season.

The Gunners youth graduate has made just two appearances for the Arsenal first team with both coming from the bench in the EFL Cup this season.

However, it is believed that Brendan Rodgers will attempt to lure the Premier League ace up to Scotland with the prospect of more regular first-team football.

With Willock’s contract set to end at Arsenal in the summer he could prove a very cheap replacement for Roberts, who has featured in 48 matches while bringing a return of 11 goals and 13 assists since joining on loan from Manchester City in January 2016.

The loanee has played a more reduced role in the team this season with the addition of Scott Sinclair in the summer and Rodgers may be looking for a player of Willock’s age, who can grow at the club.

Due to Roberts’ role in the squad Celtic do not need to splash out millions on a replacement for him, or even sign an established proven player. This means the Hoops can afford to bring in someone like Willock, who has bags of potential and will only get better at his age. The Scottish giants have a fantastic record of bringing in young players from around Europe on the cheap before making a huge profit in their sales and Willock could prove to be another success story in the future if he does sign.

In other Celtic transfer news, here is why this Premier League club is perfect for Moussa Dembele.