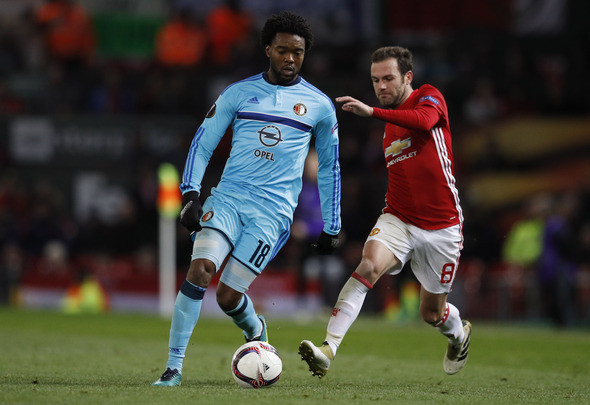 Celtic are plotting a move for Feyenoord defender Miquel Nelom, according to a report.

The Evening Times claims that Brendan Rodgers is looking at the 26-year-old as a potential replacement for left-back Emilio Izaguirre, who left Parkhead earlier this summer to join Al-Fayha.

Two-times Netherlands intentional Nelom can also play as a centre-back and could also be used to sort out the current problem that is facing the Hoops squad that has been rocked by injuries to Erik Sviatchenko and Dedyrck Boyata.

It is understood that Nelom is worth around £1million and is in the final year of his contract with European side Feyenood, who won the Eredivise title last season with Celtic’s latest target making 22 appearances across all competitions.

The report adds that Premier League sides Stoke and Watford have previously been linked with the Dutch international defender, as well as La Liga outfit Espanyol.

Nelom looks like he could be a very handy addition to Rodgers’ squad. The Northern Irish boss needs a new left-back and he also needs to add depth to his options in the centre of defence. As a result, the signing of Nelom would be killing two birds with one stone, at the cost of just £1million. The Dutchman is clearly rated in his nation having earned two full senior caps at international level, he has simply lost his usual first-team place at Feyenoord in recent seasons which has seem his career stagnate slightly. However Celtic could do a lot worse than signing up a versatile defender from what was one of Europe’s most exciting teams last season.

In other Celtic news, Chris Sutton has named these two Hoops stars in his team of the week.