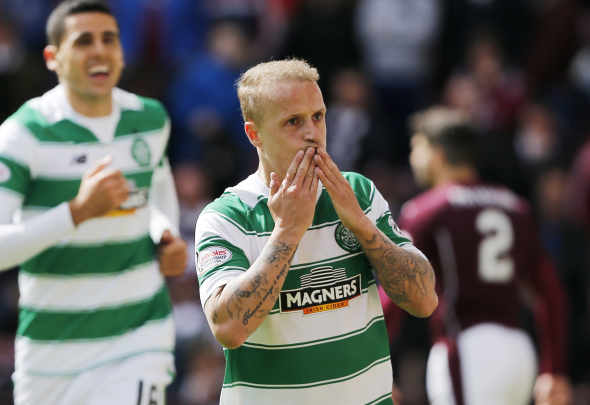 The temperamental Gers central midfielder had previously hit out at Brown, claiming he isn’t in the same league as him.

But The Sun reported that Griffiths, who scored an astonishing 40 goals in all competitions in 2015-16, has questioned Barton’s international pedigree – as well as his CV.

He said: “You know Barton has obviously got a mouth on him. How many caps has he got? Just the one for England?

“Broony has 50 for Scotland, he’s the captain of his national team, he’s won titles and he’s competed in the Champions League. It’s up to Barton to say what he wants, but look at Broony’s CV.”

The former Manchester City player is no stranger to riling up his opponents, and is expected to feature in central midfield, opposite Captain Brown when the two sides meet on 10 September.

With 13 career red cards between the two tough-tackling midfielders the Old-Firm derby is being hotly anticipated, but Griffiths believes his 31-year-old teammate is capable of coping with the pressure.

He added: “Scott’s done it at the very top level of the game, for club and country.

“If Barton wants to come up here and disrespect him, Broony being Broony will take that in his stride. The first Old Firm game at Celtic Park will be interesting.”

The 25-year-old striker’s goals last-term helped Celtic clinch their sixth League title in a row, with 31 of his 40 coming in the league from only 35 games.

In other Celtic news, Hoops’ centre-back believes Celtic is changing under Brendan Rodgers.