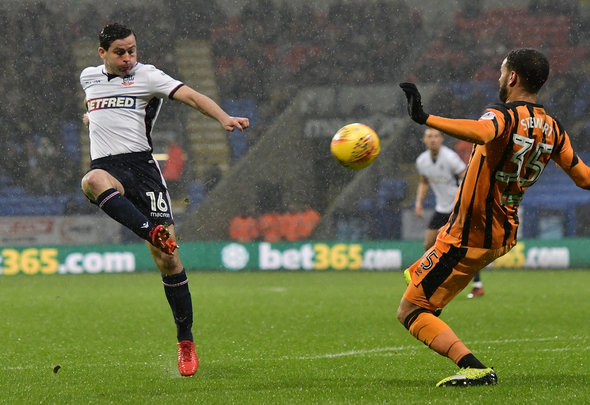 Bolton Wanderers manager Phil Parkinson has been raving over the displays of West Ham loanee Josh Cullen as he confirms talks have taken place over securing a double loan deal with the Hammers.
The Championship side saw both Cullen and fellow West Ham youth graduate Reece Burke arrive on short term loan deals from the east London club in the summer, although have found themselves reduced to bit-part players after starting the season among the starting XI.
However, in what was their last outing prior to their half-season loan spells coming to an end, both the central midfielder and centre back were handed significant game time in the 1-0 win over Hull City on New Year’s Day.
Burke was handed a place in the starting XI, while Cullen came off the bench for 77 minutes after Karl Hnery picked up a knock, with the 21-year-old having started the club’s last game of 2017, a surprise 1-0 win away at high flying Sheffield United.
English boss Parkinson revealed how delighted he has been with the midfielder’s contribution, having made 12 appearances, and confirmed he has held talks to secure both Cullen and Burke for the second half of the campaign.
He told the Bolton News: “Josh has done great. He’s been frustrated he hasn’t played but he’s got such a strong mentality.
“For a young lad he has been driving the team on. We’d like to keep him, and we’ll see.
“I want to keep all the loan players, I have had discussions with the relevant clubs and I’ll continue to do so.”
Burke, who has 15 appearances under his belt across all competitions for the Trotters, also started the victory over Sheffield United, having been left as an unused substitute for the previous three games.
In other West Ham transfer news, the club are readying a £15million swoop for a proven Premier League terrier.