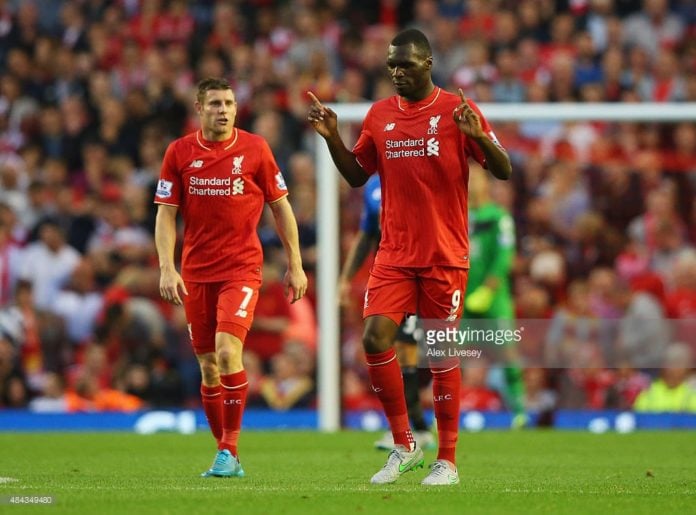 By Merseyside correspondent Cam Downes
Christian Benteke has plenty of weapons in his armoury and other things we learned from Liverpool’s second consecutive win of the new season.

Lovren remains an accident waiting to happen
New season, same old Dejan Lovren. The centre-back has been given the opportunity to make himself Martin Skrtel’s regular partner but the vulnerabilities that were so apparent in his first Liverpool campaign were again to the fore against the Premier League newcomers. Bournemouth appeared to target the No6 in the early exchanges and he responded uncertainly, most notably when Tommy Elphick rose above him to head a right-side corner in from six yards. Referee Craig Parson’s decision to disallow the ‘goal’ was unjust and there was no more relieved man in Anfield at the poor decision than Lovren. There were other nervous moments for the centre-back, who still looks an accident waiting to happen.

Benteke makes Liverpool less predictable
The moment when Christian Benteke prodded Jordan Henderson’s magnificent whipped cross into the net to open his Liverpool account will stay with him forever. Given that the left-flank cross possessed the pace and bounce of a Steven Finn delivery, the £32.5million man deserves credit for the polish of his finish. It was a memorable home debut for the Belgian. He gave Bournemouth centre-backs Elphick and Steve Cook a difficult evening with his aerial prowess but Benteke is more than just a physical powerhouse. He also has a sure technique and nose for goal, and is neat and tidy in possession. The great advantage for Liverpool is that he makes them less predictable opponents. Under Brendan Rodgers, they have been criticised for being one-dimensional. With Benteke in the team, they can mix up their play and always have an outlet if they are under pressure.

Coutinho is the new darling of Anfield
One of the few highlights of Liverpool’s disappointing 2014/15 campaign was the form of their Brazilian magician. Where most of his team-mates performed in fits and starts, or not at all, Philippe Coutinho was a consistent beacon of inventiveness and he was justly rewarded with a place on the six-man Player of the Year shortlist. The No10 has picked up where he left off, despite the rigours of his Copa America-led summer. After turning one point into three at Stoke with his magnificent winner, he revelled in the space given to him by Bournemouth and fizzed with energy and menace from his central playmaking role. In truth, Coutinho should probably have scored one of the three presentable chances that came his way, but there was so much to admire in another display that shows why he is the new darling of Anfield. Little wonder he got a standing ovation when he was subbed after 80 minutes.
Bournemouth are not over-awed by their top-tier status
Eddie Howe’s team were unfortunate not to leave Anfield with a point. Elphick’s early header should not have been disallowed and the Benteke goal was illegitimate because of Coutinho’s off-side position when Henderson’s cross whizzed across the face of the goal. The visitors understandably tired late on but it is not being patronising to say the south-coast team are a welcome addition to the Premier League. They came to Anfield, refused to be overawed and gave it a good go. Some of their approach play, particularly when the full-backs poured forward, was very impressive. So-called bigger teams will be far less ambitious when they come to this stadium this season.

Liverpool are learning the value of clean sheets
Two games, two clean sheets. Such defensive parsimony has not always been the case during Brendan Rodgers’ tenure. Liverpool had a spell in the middle of last season, between Christmas and March, when a three-man backline was the bedrock of a more stable team, but they could not keep it up. The signs are that Rodgers and his new No2 Sean O’Driscoll are now preaching less risk-taking and more pragmatism at the back, which surely suits the playing styles of the likes of Skrtel and Lovren, neither of whom are especially comfortable in possession. There is also greater organisation and resilience. It is telling that in the matches to date Simon Mignolet has barely had a save to make in goal.
If you feel like making some extra cash then grab yourself a £200 bonus from our trusted betting partner by clicking here: http://bit.ly/£200FreeBonus