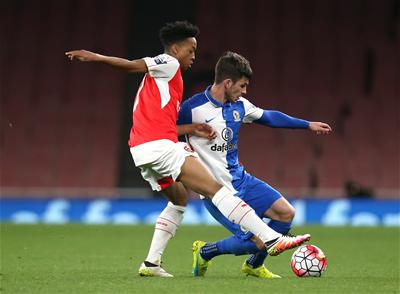 Brentford are closing in on young Arsenal winger Chris Willock, according to a report.

London publication Get West London claim that the Bees are closely monitoring the 18-year-old left-winger as they plot to sign him on a season-long loan.

It is said that the Griffin Park club are ready to seal a deal for the highly-rated youngster and that the Gunners will green light the move as they wants the teenager to play first-team football.

Due to new Football League loan rules, the London club will have to take the youngster on a loan until January, or a full season loan with clubs now unable to recall loans at short notice.

The emergency loan window has also been scrapped, so any deal will have to be made this window.

Willock could be set for his first loan move away from the north London club.

The youngster has entered the final year of his contract and is still waiting to make his senior debut for Arsene Wenger’s side.

However, the London-born attacker has represented England 27-times through the various age ranks.

Brentford and Arsenal have built up a rapport with each other over the last few years and the two club’s have struck deals for Wojciech Szczesny, Jon Toral, Chuba Akpom and Rhys Murphy in the past.

In other Arsenal transfer news, the Gunners are eyeing up Monaco defender Marcel Tisserand.