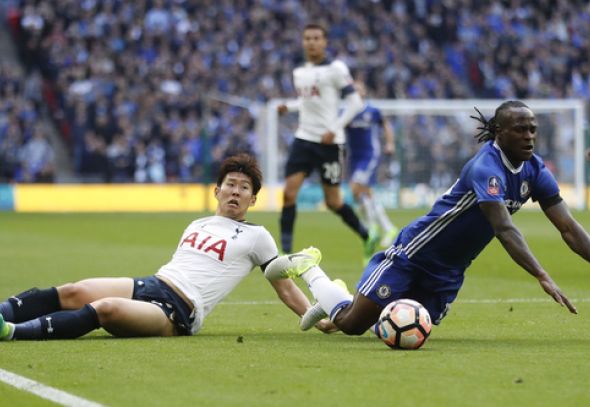 Stan Collymore believes Victor Moses dived to win a penalty for Chelsea in the win over Tottenham on Saturday.

Tottenham attacker Son Heung-Min was penalised for a sliding challenge on Moses in the penalty area, which allowed Willian to fire Chelsea back into the lead from the spot.

However, Collymore emphatically claimed on his personal Twitter account during the game that the decision to award Chelsea with a penalty was wrong, and that the 26-year-old had dived ‘100 per cent.’

As for the penalty

The challenge itself from Son was a clumsy one, going to ground early enough for Moses to make the decision to shape his run into the Tottenham player.

Even by going to ground, the South Korea international gave referee Martin Atkinson and his team something to think about, with the linesman initially flagging the foul.

Son, meanwhile, was not booked for the challenge.

Nevertheless, the penalty allowed Willian to bag his second goal of the night – following a curling free-kick – and help Chelsea to a 4-2 win and subsequently book their place in the FA Cup Final.

They will face either Arsenal or Manchester City, who face-off in the second semi final at Wembley on Sunday.

Eden Hazard and Nemanja Matic were also on the scoresheet in the Chelsea victory, with Harry Kane and Dele Alli netting for Tottenham during a thrilling encounter between the Premier League’s in-form duo.

In other Tottenham news, Collymore has also shared what could cost Tottenham following the defeat.