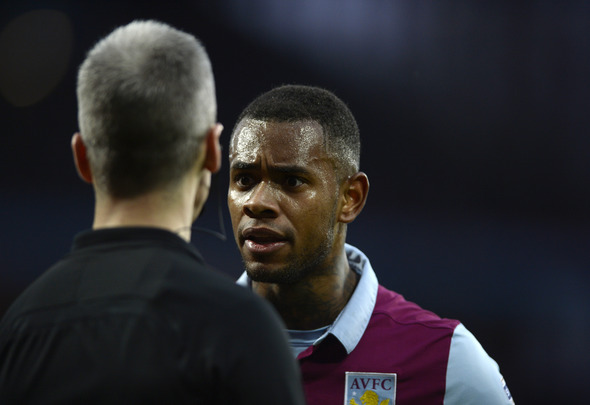 Steve Bruce has confirmed that Leandro Bacuna is on the verge of ending his four-year spell at Aston Villa.

The 25-year-old started in the Championship opener against Hull on Saturday, but was left out of the squad that won at Colchester in the Carabao Cup on Wednesday night.

Bruce has now made it clear that one of Villa’s second-tier rivals is gearing up to land Bacuna before the transfer window slams shut later this month.

The Villa manager also added that Jordan Amavi is on his way to Marseille after the West Midlands side came to an agreement with the French giants.

“We’ve agreed a fee with Marseille [for Amavi],” said Bruce to radio station BBC WM, as quoted on the BBC Sport website.

“There’s a Championship club after Bacuna, that looks close to being over the line too.”

Sky Sports reported in July that Villa had turned down a £1.5million bid from Reading for Bacuna, but it might not be them that he is close to joining now as it was understood that they had pulled out of the race for his signature as they didn’t want to spend more.

Since signing from Dutch side Groningen in 2013, Bacuna has earned 131 appearances across all competitions for Aston Villa, scoring eight goals in the process.

Bacuna is facing a lot of competition for places at Villa Park this season following the arrival of Ahmed Elmohamady. Although the Curacao international started in the centre of midfield in the draw with Hull, he isn’t natural there and as the season progress it’ll become clear that Bruce has much better options on his hands. Bacuna has had issues with discipline in the past and his performances on the pitch have not done enough to balance out that issue. The Villains should pick up a decent fee for the versatile winger and that may help them look to strengthen other areas of the squad that are lacking in depth. It should be a decent season for Villa, but the lack of progress they’ve been able to make this summer could scupper their chances of an automatic promotion.

In other Aston Villa news, Doctor Tony Xia has responded to reported interest in this Premier League attacker.