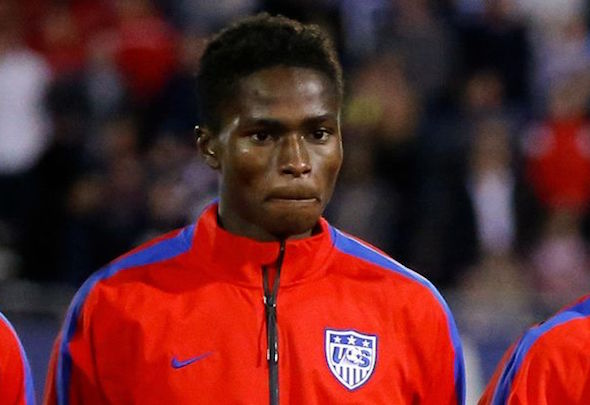 Manchester United have completed the signing of one of USA’s emerging stars, the club confirmed on Friday night.

Defender Matthew Olosunde, 18, has finalised his transfer from New York Red Bulls following a delay over his international clearance.

The New Jersey-born teenager signed for United on 29 January, but Old Trafford chiefs only announced the deal on Friday after the American was finally cleared to play for the club.

Olosunde is described as a right-back who loves to attack, and standing at 6ft 1in, his big stride allows him to utilize his pace.

After converting from a winger back to defence, Olusunde went on to represent his country on numerous occasions at youth level.

Capable of playing in a more central position also, the emerging star has been training with United on and off since last summer and he has done enough to impress Louis van Gaal and the club’s academy coaches.

Upon receiving the green light from the Football Association, he was immediately called into the club’s U18 side for their clash against Brighton on Friday evening.

The 18-year-old from New Jersey was previously with New York Red Bulls in his homeland and has been added to Tommy Martin’s Academy squad at United.