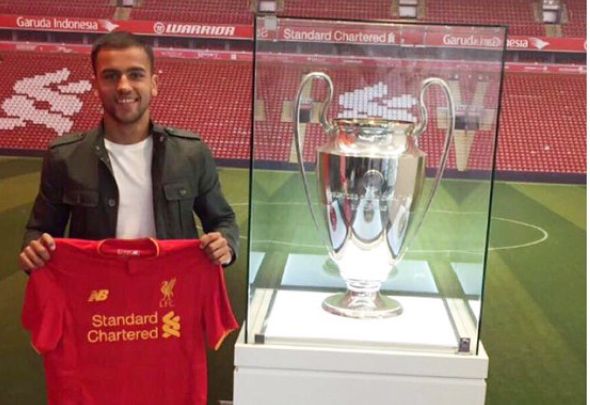 Former Barcelona defender Juanma has signed with Liverpool, he announced on Twitter on Thursday.

The Liverpool Echo reported on Wednesday that the left-back was poised to join the Merseyside giants following a successful trial.

Juanma has now shared photos on his personal Twitter account in which he is seen signing a contract and holding the famous red shirt at Anfield.

“My time at Barcelona has ended,” he added in Spanish on Twitter. “Thank you for those eight seasons. Life goes on.”

The Echo report claims Liverpool beat off competition from Spanish club Villarreal to secure the services of the 19-year-old.

He is not expected to feature in the first-team in the immediate future despite growing concerns about Liverpool’s options at left-back.

Liverpool fans may be somewhat disappointed with the signing as the club have been searching for a new senior left-back to join the squad.

Jurgen Klopp has already parted ways with left-back Brad Smith this summer who joined Bournemouth and has only been left with Alberto Moreno as the only recognised defender in that position.

The German manager has failed to sign Leicester’s left-back Ben Chilwell after he agreed a new contract with the Premier League champions until 2021.

Former Liverpool player John Arne-Riise told Sky Sports that the club must sign a new left-back in the transfer window as they will need competition for places.

Englishman James Milner has been used as an emergency left-back during the pre-season and Klopp may continue to use him as cover to Moreno.

Youngster Juanma is unlikely to be called into the first-team unless Liverpool suffer a defensive crisis and remains one for the future.

In other Liverpool transfer news, their academy graduate is poised for a Celtic loan move.