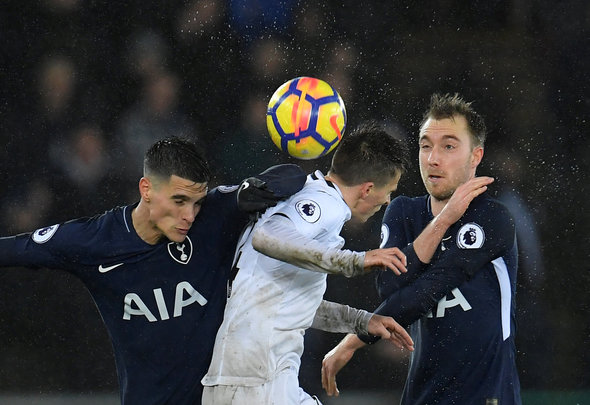 Tottenham manager Mauricio Pochettino has confirmed that the club’s first team squad could be set for an imminent boost after a host of absences from the side.
The Argentinian boss has had to deal with several of his stars missing for Spurs’ recent matches, while there have been a number of other issues players have suffered between their last outing against Southampton and Saturday’s home tie against Newport County in the FA Cup.
However, he has revealed that all of the missing players, seven in total, are set for imminent tests to see whether they will be ready to take on the League Two side, who defeated Leeds United to make it to the fourth round.
As relayed by journalist Ben Pearce’s personal Twitter account during Pochettino’s press conference, the manager revealed that Serge Aurier and Harry Winks were recovering from their respective layoffs, while Erik Lamela is a doubt with a muscle injury, but that defensive duo Toby Alderweireld and Danny Rose would be assessed after their long-term absences.

#thfc Aurier (calf) and Winks (ankle) are continuing their recoveries, and Erik Lamela has a "bruised gluteus muscle" – which is essentially a sore arse. Eriksen and Lloris are recovering with gym work. Alderweireld is integrating with 1st-team training. Unclear how many can play

#thfc Pochettino says Alderweireld and Rose will be assessed, along with other players, to see if they can play against Newport. No news on the transfer front. Poch says you have to be v confident before spending big money and bringing a player from abroad to the PL in January.

Joining the Belgian and English internationals in undergoing tests before Saturday’s match will be Christian Eriksen and Hugo Lloris, who both missed the 1-1 draw with Southampton as a result of illness.
Their return to fitness would be a boost to the club’s hopes of reaching the fifth round of the FA Cup, as Spurs look to better their semi-final appearance last season.
In other Tottenham news, a European giant is planning a sensational move for one of the club’s stars.
We’ve launched a << BREAKING NEWS FEED>> exclusively for your club. ‘Like Us’ on Facebook by clicking here if you want 24/7 updates on all Tottenham breaking news.