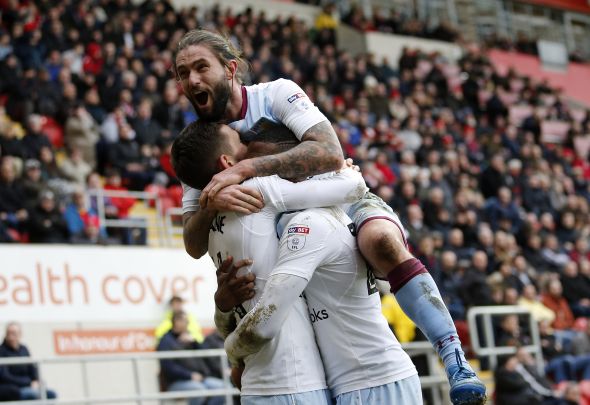 Conor Hourihane has named Henri Lansbury as the best Aston Villa player he played against before moving to the club in January.

Irish ace Hourihane named Lansbury as the best Villa player he faced before joining, after Lansbury shone in a match between the midfielder’s old sides earlier this season.

Former Arsenal youth player Lansbury struck a hat-trick for Forest back in November against Barnsley, as Hourihane’s Tykes suffered a 5-2 loss at Oakwell.

“It’s a good question,” Hourihane said in a video posted on Villa’s official Twitter account, when asked to name his best opponent from the club. “There’s lots of players to choose from.”

“I’ll go for Henri Lansbury. Played against him when I was with Barnsley before Christmas and he scored a hat-trick, so he was good on the day.”

The duo are set to combine in the midfield once again for Bruce’s side on Tuesday night, as they travel north to face Huddersfield.

In what will be a difficult test against David Wagner’s third placed Terriers, Villa’s winning run of three games could come under threat at the John Smith’s Stadium.

However, a win for Villa could see them rise into 12th position, leapfrogging Neil Warnock’s Cardiff if the Welsh giants lose to Championship strugglers Blackburn on Tuesday.

Hourihane will be hoping to add to his tally of seven goals this season, after finding the back of the net for the first time in claret and blue against Bristol City seven days ago.

In other Aston Villa news, David Prutton has predicted the outcome of Tuesday’s clash against Huddersfield.