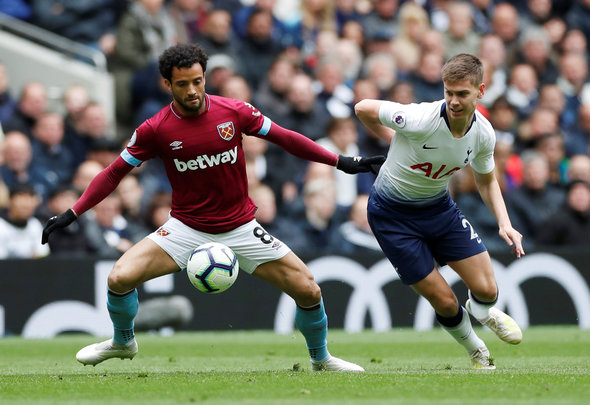 West Ham attacking pair Sebastien Haller and Felipe Anderson will be crucial in delivering fluid and attacking football at the London Stadium, according to Danny Mills.

The former England defender, speaking exclusively to Football Insider, has been left raving over the Hammers’ two most expensive signings, insisting that they are going to play a huge role in bringing an exciting style of play to east London.

The Irons confirmed Haller’s capture on Wednesday, revealing that he had arrived from Eintracht Frankfurt for a fee breaking the record previously held by Anderson.

Mills insisted if manager Manuel Pellegrini can get the best out of Haller then he will deliver goals for the Hammers and backed Anderson to play a big part in the new striker’s success.

Asked about Haller by Football Insider, Mills said: “A player that’s done very, very well in the Bundesliga. He comes in and should make a difference. He’s got a lot of very good attributes. West Ham will be thinking if they can get players in and around him – that’s the key, at Frankfurt they played with two wide players, any frontman relies on service.

“You’re only good as the chances provided for you. I think he’s a very, very good signing. If West Ham can play to his strengths there’s no reason he can’t be a big success.

“(Felipe Anderson) will definitely play a big part. We’ve started to see a change in the way West Ham play, a change in their style. What we’re starting to see now is more fluid football, a more attacking regime under Pellegrini and this will be part of it.”

Haller netted 15 goals in Germany’s top flight last season as well as adding another five to his tally in the Europa League, his strikes firing Frankfurt to a semi-final defeat at the hands of eventual victors Chelsea.

Anderson meanwhile scored 10 and chipped in with a further five assists during his first season in England.

In other West Ham news, it can be REVEALED that a Championship side has made a move to snap up an Irons attacker Pellegrini could get rid of this summer.