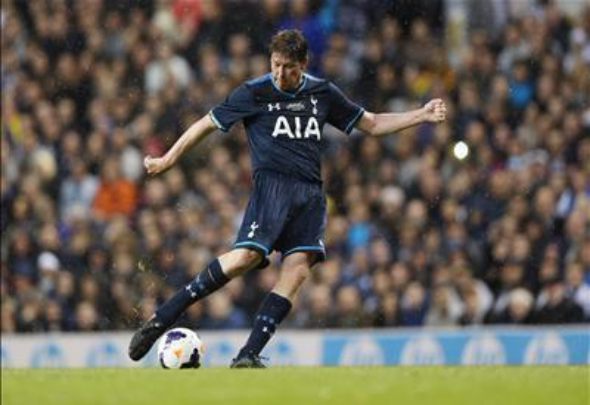 Darren Anderton has hailed Tottenham for a “great five minutes” after they produced an unbelievable comeback against Swansea.

Spurs scored three goals in six minutes to record a 3-1 win at the Liberty Stadium on Wednesday night which keeps their hopes of lifting the Premier League title alive.

For the majority of the game, Mauricio Pochettino’s side found it very difficult to get past a side that is fighting to survive relegation this season.

However, in the 88th minute, with Pochettino’s side losing 1-0, attacking midfielder Dele Alli stepped up to score his 15th league goal of the campaign.

Versatile attacker Son Heung-Min then scored the winner in the 91st minute before Christian Eriksen made sure of all three points moments later.

After the match, former England international and club legend Anderton posted this message about the dramatic win.

What a great 5 minutes #COYS

It means Tottenham are still seven points behind leaders Chelsea in the table after Antonio Conte’s side secured a narrow 2-1 win against Manchester City.

This month will be hugely important for Spurs and their quest to lift silverware at the end of the campaign.

They have four Premier League matches in April, including Watford this Saturday and their north London rivals Arsenal on April 30.

Furthermore, they will also take on Chelsea in the semi-final of the FA Cup at Wembley on April 22, knowing a positive month could see them lift at least one trophy at the end of the season.

In other Tottenham news, fans react on Twitter to Chelsea beating Manchester City.