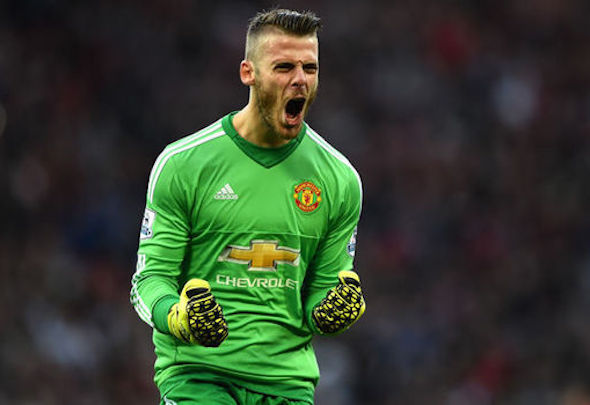 David de Gea is back to his superlative best, Memphis Depay is Louis van Gaal’s second-best striker option and other things we learned from Watford 1 Manchester United 2
By North-west correspondent Alex Stevens
De Gea is capable of saves that few goalkeepers can match
When Arsenal prised Petr Cech from Chelsea in the summer, John Terry delivered his former colleague the ultimate compliment of saying he could be worth “12 to 15 points a season” to his new club. What then of David de Gea, whose goal has been so impregnable that the late penalty that beat him was the first Premier League goal he had conceded since his team’s 3-0 defeat to Arsenal on 17 October? United’s Player of the Year for the last two seasons produced another decisive performance at Vicarage Road to help his team clinch a 2-1 win against a tenacious Watford. Few goalkeepers on the planet could have matched the stunning save he pulled off to deny Almen Abdi after 71 minutes. Unsighted, the Spaniard had just a milli-second to sight the fierce shot and dive to his right to paw the goal-bound shot away to safety.
Depay is a highly capable spearhead
This was a highly encouraging display from the £25million summer signing. With Wayne Rooney, Anthony Martial and Marouane Fellaini unavailable, Depay was pressganged into a unfamiliar centre-forward role and responded with a performance full of menace. He opened the scoring with a sweetly-timed left-foot volley as he latched on to a cross from Ander Herrera and gave the Watford backline problems with his pace and dribbling. Van Gaal had asked for more from his fellow Dutchman and he immediately vindicated his manager’s faith. Indeed, given some of Rooney’s pedestrian displays of late, Depay actually looks a better proposition than the Englishman in the No9 role. After Anthony Martial, Depay could prove to be United’s second best striker option.


Van Gaal is not afraid to throw in the kids
Van Gaal has developed a reputation throughout his 30-year managerial career of giving opportunities to youngsters, and he has maintained that trend during his season-and-a-half at Old Trafford. Eight United players – Jesse Lingard, Tyler Blackett, Reece James, Saidy Janko, Andreas Pereira, Paddy McNair, Tom Thorpe and Cameron Borthwick-Jackson – have graduated from the academy to the first team under Van Gaal, while rookies Marcus Rushford and Sean Goss were named on the bench for the first time today in the absence of Rooney and company. The duo were not asked to make their debuts, but McNair replaced Phil Jones after 69 minutes and Brazilian Andreas Pereira, 19, came on for the injured Ander Herrera at the 25-minute mark. Van Gaal has total trust in youth.
Deeney is a strong character
Bastian Schweinsteiger had to double-check the identity of the Watford skipper in his post-match interview, but the striker is fast gaining a reputation as a bona fide Premier League performer. Twice Troy Deeney came close to equalising with fierce strikes before banging in the late penalty that levelled the scores. It might have been only his third Premier League goal of the season but Dooney works his socks off, gives defenders headaches and is decent on the ball. If Watford are to stay up, he will surely have a big role to play.

Mean machine are starting to show title-winning potential
“We are fighting for the first position in the Premier League,” claimed Van Gaal afterwards. The Dutchman was honest enough to admit that his side defend better than they attack but they are a mean meachine who opponents do not want to play. This was not vintage United – far from it – but a record of nine goals conceded from 13 Premier League matches shows the foundations are gradually being laid for a title challenge. Before Arsenal kicked off at West Brom and Manchester City hosted Liverpool later on Saturday, United stood top of the table on 27 points. They are in the title mix.