Arsenal are closing in on the signing of Rangers wonderkid Billy Gilmour after making a late bid to land him from under the noses of rivals Chelsea, according to a report.

The Scottish Sun claim Ibrox chiefs gave the Gunners permission to give Gilmour and his family the all-star treatment at the weekend.

It is said that Arsenal whisked the youngster to London, was shown around their academy headquarters and watched the club’s Under-16s in action.

The Arsenal academy head of scouting Steve Morrow, a former midfielder for the club, was charged with trying to entice Gilmour to north London during the talks.

This comes days after reports in the Sun that Chelsea were “close to a deal” to sign the highly rated young attacking midfielder.

Fifa rules prohibit any official move until just before the teen sensation turns 16 on June 11 but Arsenal’s late window action shows their intent to win the race for his signature.

The Scottish Sun report that Gilmour could be signed for £100,000 in a cross-border compensation deal if the Premier League giants wait until the summer cut-off.

It increasingly appears that Rangers manager Mark Warburton’s public pleas for Gilmour to ignore the attention from Europe’s elite and develop his game at Ibrox have fallen on deaf ears.

Gilmour has earned rave reviews for his performances in age-group football and has been linked with a move to a string of glamorous clubs.

In addition to the teams of Arsene Wenger and Antonio Conte, Manchester United, Manchester City, Tottenham, Bayern Munich and Barcelona all keeping close tabs on him.

Warburton has previously warned Gilmour of the perils of joining a Premier League big gun and then rotting in their reserves until his early 20s.

“I like to think we can keep him here, develop him and he can play in the first team,” said Warburton, as quoted by the Scottish Sun. “If then, in three, four years’ time he gets a move, good luck to him.

“Billy is a talented player and I’m sure many clubs are looking at him. Big clubs have vast scouting networks covering that age group and you can’t compete financially. If the boy wants to go, all the club can do is seek the best deal.”

Rangers are aiming to maintain their grip on second place in the Scottish Premiership in the second half of the season.

They beat Motherwell 2-0 in the league on Saturday, thanks to goals from Kenny Miller and new loan signing Emerson Hyndman.

Warburton’s side are a distant 22 points adrift of runaway leaders Celtic, who have remarkably won 21 of their 22 league matches of the campaign.

But Rangers are two points ahead of Aberdeen, who are third in the table.

In other Rangers transfer news, a senior player is set to quit within 48 hours in a major bombshell. 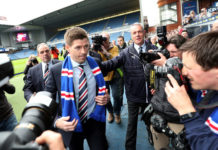