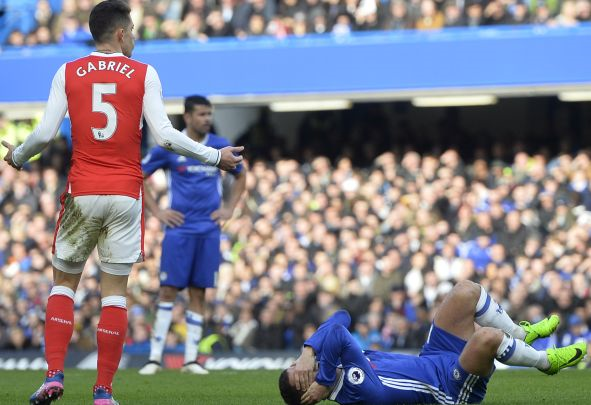 Arsenal fans have taken to Twitter to share their mixed views after centre-back Gabriel Paulista left the club to join Valencia.

The Gunners confirmed that the 26-year-old was moving to play in La Liga on Friday afternoon on their official website.

The north London club announced that the defender had joined the Spanish side for an undisclosed fee and thanked the Brazilian for his contribution to the club over the past two and a half years.

Fans displayed mixed responses on social media, but the overwhelming majority of supporters were disappointed to wave goodbye to his passion and fire which he provided on the pitch.

Here is a selection of their messages on Twitter.

Good riddance. Was never good enough for us.

Could put in a good performance at times but not consistent enough. Great passion though

Stupid decision to let him leave. A very decent backup

Good luck Gabriel. You put Costa in his place and locked down Lukaku. Loved your PASHUN 👌

Loved the club, always gave his all. Just couldn't settle in at the club. Thanks for the memories Gabriel. pic.twitter.com/JlyN5P9aLU

Paulista joined the Gunners from Villarreal in January 2015 and made a total of 64 appearances across all competitions for the club where he scored a single goal and assist.

The centre-back has been out of action since Arsenal’s final game of the Premier League 2016/17 season against Everton after the defender injured his knee during his side’s 3-1 victory.

The Brazilian was known for his strong presence on the pitch, and displayed a particularly stunning performance last season during the Gunners’ FA Cup semi-final victory over Manchester City where the defender’s dominating tackles and strength on the backline drove Arsenal to the final.

In other Arsenal news, Manchester United are set to hijack the Gunners’ pursuit of a Monaco winger.