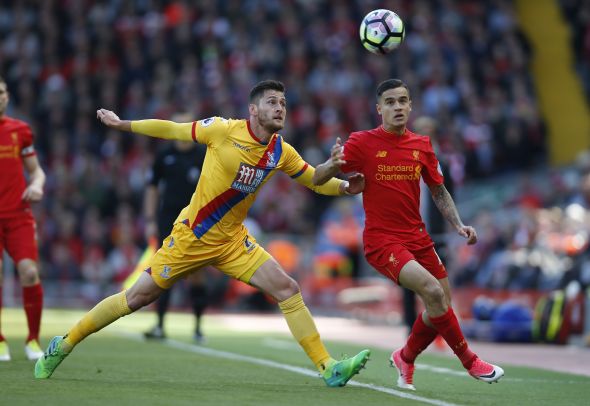 Dermot Gallagher believes Liverpool should have been awarded a penalty against Crystal Palace on Sunday for a foul on Philippe Coutinho.

Former Liverpool ace Martin Kelly clumsily dived in on the Brazilian international in the Palace penalty area as he danced around the Eagles defenders, but he decided not to go to ground.

The 24-year-old’s shot was blocked and the chance went begging after he opted to stay on his feet, before questioning why referee Andre Marriner didn’t award the penalty.

Former Premier League referee Gallagher told Sky Sports News that the former Inter Milan playmaker had been “punished by being honest” as the Reds suffered a 2-1 loss at Anfield.

“This dilemma manifested itself with Matty Jarvis at Arsenal and West Ham when he stayed on his feet and everyone commended him, but he did not get a penalty,” Gallagher said.

“I wonder whether we have to sit down in the summer and have this mindset of: ‘Look, that player has in some ways been punished by being honest and trying to stay on his feet.’

“If that was in the middle of the park, you just go back (and award a free-kick). We have this reluctance to give a penalty and I wonder if we need to sit down and say: ‘Well look, in this situation we are going to take this action.'”

Coutinho had given his side the lead in the 27th minute with an inch-perfect free-kick that flew past goalkeeper Wayne Hennessey into the back of the net.

However, Belgium international Christian Benteke came back to haunt his old club with two goals to turn the game on its head and leave Liverpool’s top-four slot in doubt.

It means the decision not to award a penalty could prove very costly.

Jurgen Klopp’s side remain in third place, but are just three points above Man United in fifth – and United have two games in hand.

Liverpool are next in action on May 1 against Watford at Vicarage Road, and will be hoping for a repeat of this season’s reverse fixture that saw the Reds triumph 6-0 at Anfield.

In other Liverpool news, former England defender Matthew Upson has revealed why Liverpool confused him against Palace.