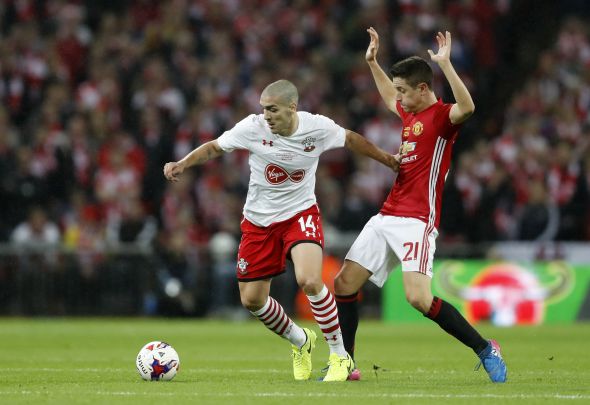 Dietmar Hamann believes Liverpool should attempt to lure Southampton’s Oriol Romeu to Anfield in the summer.

Romeu, 25, impressed Hamann with his display during Saints’ 2-1 loss to Tottenham on Sunday, as he anchored Claude Puel’s midfield with aplomb despite the defeat.

Former Liverpool midfielder Hamann believes the Reds should target Romeu, as well as claiming on his personal Twitter account that Manchester City “could do with” him.

Romeu been excellent again today, type of player City and Liverpool could do with

Spanish midfielder Romeu is one of the first names on Puel’s team sheet at the moment, as he continues to shine at the base of Saints’ midfield.

Known for his accurate passing and ability to read the game, Hamann believes the former Chelsea midfielder could become a crucial signing for the PL elite clubs.

Manager Jurgen Klopp could prioritise a summer move for the holding midfielder, with doubts over the performances of Emre Can and the fitness of captain Jordan Henderson.

Liverpool are known for their transfer dealings with Southampton in the past, after bringing Dejan Lovren, Adam Lallana, Sadio Mane, Nathaniel Clyne and Rickie Lambert to Merseyside in recent years.

Germany international Can has struggled to impress in the number four role with his future in doubt, while Henderson remains sidelined through injury. With Can potentially about to depart Anfield in the summer, bringing in back-up for Henderson should be at the top of Klopp’s to-do list along with a new left-back. Romeu has been in fine form this season and would be a top signing if bought. His ability to predict an opponent’s next move in front of the back four will offer an additional defensive blanket to Klopp’s back line, who are in desperate need of reinforcements this season after a number of high-profile mistakes. However, it remains to be seen how much Klopp would have to pay for Romeu’s services with a contract until 2021, and that could mean more readily available options are out there this summer.

In other Liverpool transfer news, this £35million-rated defender is the subject of a potential summer switch to the Reds.