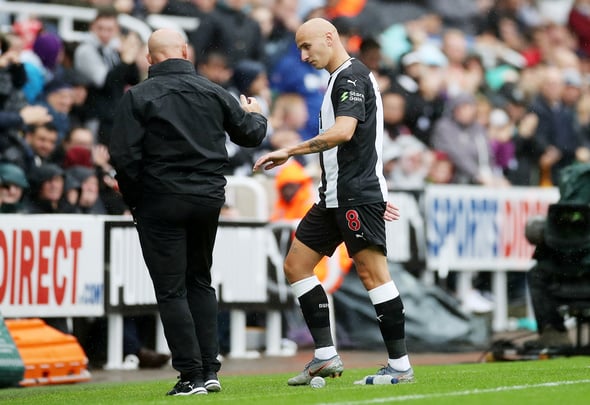 Darren Bent claims that Jonjo Shelvey is Newcastle United’s best player but that the midfielder is running low on confidence at St James’ Park.

The former Sunderland and England striker, speaking exclusively to Football Insider assistant editor Russell Edge, insists that the midfield maestro has the technical ability to turn games around and suggests that he is frustrated with the lack of quality around him on the pitch.

The 27-year-old came under heavy fire for his performance against Brighton, struggling to get a foothold during the 0-0 draw at St James’ Park.

Bent says that the former Swansea and Liverpool man is a cut above the rest of his teammates when it comes to his quality on the ball but that he needs to regain his belief to hit the heights expected of him.

Bent told Football Insider: “For me he looks low on confidence, I still think he’s their best player, the one with all the quality.

“I’ve played with players like him, who are on a different level to everyone else technically, they’re walking around playing and he’s just thinking: ‘What am I doing playing with these players, they’re not doing me any favours.’ I know he can’t think that because he’s their best player and they need him.

“It wasn’t his best game but I think he’s still got the quality to turn things around.”

Shelvey has played four times in the Premier League for Newcastle this season, getting off the mark in front of goal with a consolation strike against Norwich City away from home.

He has 116 appearances under his belt for the Magpies, more than any other club he has been at during his career, with a total of 191 Premier League outings to his name.

In other Newcastle United news, Danny Mills has told Football Insider that one player should have alarm bells ringing at St James’ Park after their “dismal” display against Brighton.