Alan Hutton has blasted the Celtic defence for pointing blame at each other in Saturday’s 2-2 draw against Hibernian.

The former Rangers and Scotland full-back, speaking exclusively to Football Insider assistant editor Russell Edge, insisted the Hoops’ defenders needed to take individual responsibility instead of screaming and shouting among themselves.

The Bhoys fell behind by two goals before Odsonne Edouard and Diego Laxalt scored to rescue a point for Neil Lennon’s men. 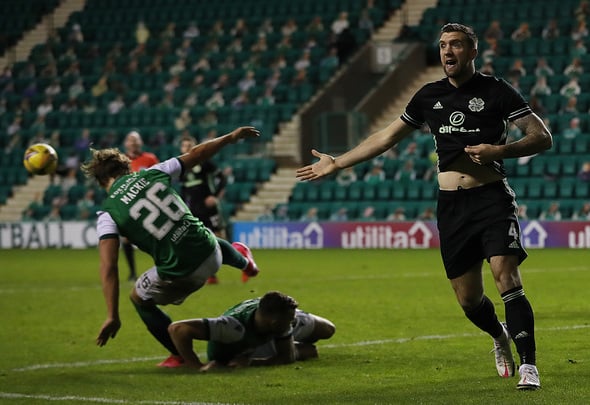 Hibs’ first goal, which was scored by Rangers defender Jamie Murphy after Scott Bain saved a penalty from Kevin Nisbet, was followed by a furious reaction from several of the Celtic players, including the goalkeeper.

Hutton has blasted the Hoops stars for their behaviour and insisted they need to take responsibility instead of laying the blame elsewhere.

“I think you have to defend as a unit, there’s no point in blaming each other,” Hutton told Football Insider.

“It’s such a difficult period, you need to be strong, you need to have a good foundation to play forward and it doesn’t look good when everybody’s shouting at each other, I don’t like to see that, especially teammates when they’re blaming each other.

“Just take responsibility for your own part in the pitch and just deal with it, that’s all you can do is win your battle and hopefully the guy next to you does the same and then you can move forward.

“This blame game, I just don’t like it, I don’t like seeing players just throw up their hands and go in huffs with each other, it just doesn’t look good.

“Imagine you’re a fan and you’re seeing that, it doesn’t look good for anybody involved. You have to be together, win, lose or draw, you must be together as a team.”

In other Celtic news, another Hoops star has been savaged by Football Insider pundit for letting the team down.