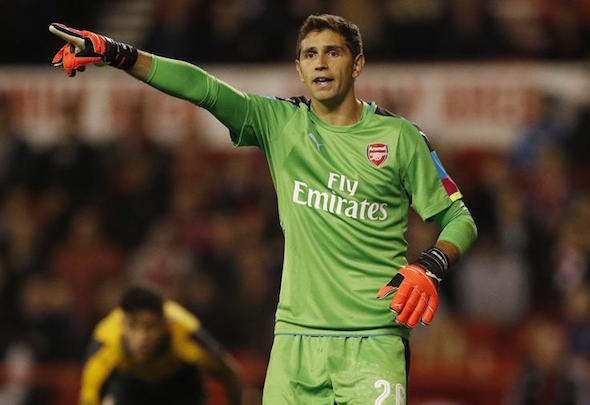 Arsenal have confirmed that goalkeeper Emiliano Martinez has exited the club to join Getafe on a temporary basis.

The Gunners announced on their official Twitter account and official website on Wednesday evening that the 24-year-old has agreed terms to a season-long stay with Getafe, who will be featuring in La Liga for the upcoming campaign.

The South American goalkeeper is seen as third choice in his role at the Emirates behind Petr Cech and David Ospina, but he still managed to earn five appearances for the Gunners across all competitions last season.

Martinez has been on the books at Arsenal since his 2010 move from Independiente and has featured in the senior squad on 13 occasions in total.

His switch to Getafe will be his fifth loan spell away from north London but his first outside of England following previous stints with Oxford United, Sheffield Wednesday, Rotherham and Wolves.

The former Argentina Under-20 international will be joining up with a Getafe side that secured promotion to La Liga last season by winning the second-tier play-offs.

Arsenal are certainly well-stocked in the goalkeeping department. Cech is one of the best shot-stoppers in the Premier League while Ospina proved towards the back end of last season that he can also do a job in Arsene Wenger’s squad. Martinez was finding it hard to get senior football and a loan move away from the Emirates certainly makes sense for a player who needs to be getting as much experience as possible. At the age of 24, you would expect Martinez to be featuring as at least a second choice goalkeeper somewhere by now. He will have a tough job to do with newly-promoted Getafe, especially when he plays against the likes of Lionel Messi and Cristiano Ronaldo. He should be hoping that he can put on good displays to at least get offers from other teams next summer who will want him as their No 1.

In other Arsenal news, the Gunners are in pursuit of this Premier League teenager, who has recently been absent from training.