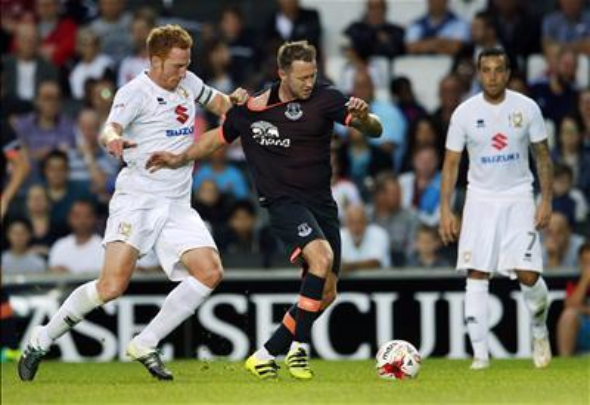 Aidy McGeady has joined Preston from Everton on a season-long loan, it was announced on Wednesday night.

Gerard Deulofeu, Kevin Mirallas, Aaron Lennon and Yannick Bolasie are all ahead of McGeady in the pecking order at Goodison Park and boss Ronald Koeman has given the green light for the winger to find first-team football elsewhere.

The club announced the deal on their official Twitter account, with McGeady to stay in Preston for the rest of the season.

The club also announced that 18-year-old defender James Yates will spend the first half of the season on loan at Crewe.

Yates is scheduled to return from the League Two club in January.

McGeady moved to Goodison Park from Russian side Spartak Moscow in the of 2014, but has struggled to find regular football at the club.

During his time in Merseyside he has played in 43 encounters with a return of just one goal.

The right winger has failed to feature since Koeman took over from Roberto Martinez, with his most recent outing in the Capital One Cup over a year ago.

He spent the second half of last season on loan in the Championship with Sheffield Wednesday where he played in 13 fixtures for the Owls.

The winger still has two years left on his current contract at Goodison Park but he will spend at least half of that time away from Everton, under Simon Grayson at Preston.

In other Everton transfer news, an attacker is heading for a medical after a club-record deal was agreed.