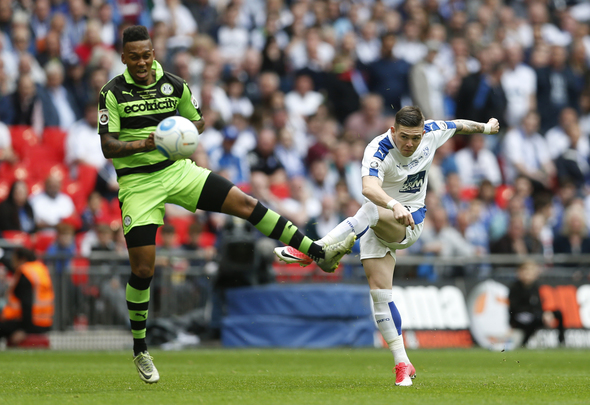 Tranmere have confirmed the signing of Liverpool attacker Jack Dunn.

A statement on the National League club’s official website confirmed the news on Friday following the 22-year-old’s release from Anfield.

Dunn has signed a one-year contract with Liverpool’s Merseyside rivals after spending the second half of the season there on loan.

He was a part of the Tranmere squad that reached the National League play-off final last month, but his side fell at the final hurdle in a 3-1 loss to Forest Green Rovers at Wembley.

The striker is a product of the Liverpool youth academy but has never made a senior appearance for the Reds.

Dunn spent the first half of the campaign on loan with League Two’s Morcecambe and was in a rich vein of form as he netted six goals in 19 appearances in all competitions.

He played eight times for Tranmere but failed to find the net.

Rovers manager Micky Mellon told the club’s official website how delighted he was to secure the Liverpool youngster.

“I’m pleased to be able to bring a player of Jack’s quality to the Club on a permanent basis,” he said.

“He’s another young player who is hungry, keen to learn and ambitious and wants to help take this Club forward.”

Liverpool have one of the best academies in England and sometimes they can develop some of the best youngsters in the country. Unfortunately a lot more of them don’t make it than the ones that do. Dunn is likely to go down as one that failed to make it, unless he endures a miraculous rise through the divisions in the future. He could prove to be a good signing for Tranmere though. They’re a club who really need to be playing in the Football League and getting a striker who was born and raised on Merseyside is definitely a big plus for them. Dunn played well for Morecambe in the league above Tranmere’s, so their fans will be hoping he replicates that form.

In other Liverpool news, the Reds are weighing up a move for this long-term target.