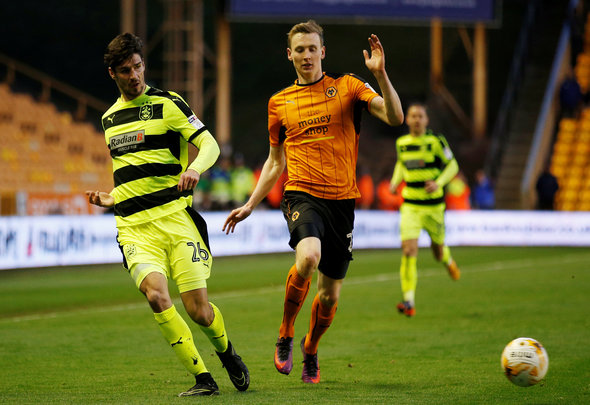 Reading have confirmed that they have signed striker Jon Dadi Bodvarsson from Wolves.

The Royals announced on their official Twitter account on Friday that the 25-year-old had penned a three-year deal at the Madejski after a deal to transfer him from Wolves was agreed.

Championship promotion contenders Reading confirmed on their official website that Bodvarsson was set to travel out to the Netherlands in order to meet up with Jaap Stam’s squad in their pre-season training.

The target man was only signed by Wolves last summer, but he largely struggled to make an impact at Molineux as the Black Country outfit struggled to avoid a relegation battle for most of last season.

In total, Bodvarsson scored just three goals in 48 appearances across all competitions for the Wanderers following his switch from German club Kaiserslautern.

The Express and Star had reported that Wolves were looking to recoup the £1million they spent for the 32-times Iceland international in 2016. However the Royals have announced that he has joined them for an undisclosed fee.

It’s been a big summer at Molineux and it seems new manager Nuno Espirito Santo is in no mood to mess around when it comes to chopping and changing his squad. Bodvarsson’s move to Reading doesn’t seem to make much sense. A striker with such a poor goal scoring record is relatively useless and three goals in 48 appearances is really as dreadful as they come. There must have been better targets out there for Stam and co, but Wolves must be happy that they’ve been able to possible pick up some funds from his sale. Most importantly it thins out what is at the moment a quite big squad. Nuno has been in a ruthless mood so far so Wolves fans shouldn’t expect this to be the last deal of the summer. A new striker is definitely needed.

In other Wolves news, the club have agreed the terms to another defender transfer.