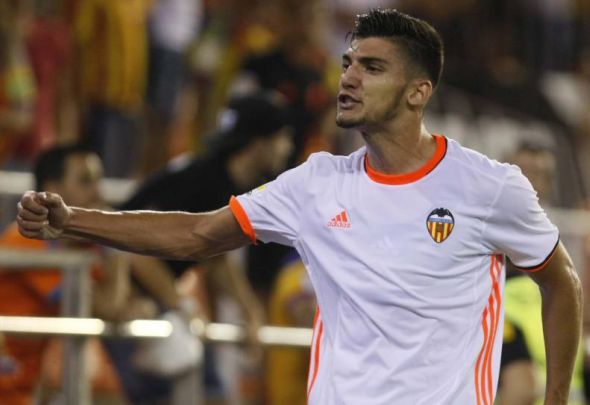 Wolverhampton Wanderers have completed the permanent signing of Rafa Mir from Valencia, amid reported interest from Real Madrid.
The club released the news via their official Twitter feed on Wednesday evening.

Wolves are delighted to confirm the arrival of Rafa Mir on a four-and-a-half-year deal for an undisclosed fee from @valenciacf. #WelcomeRafa

The Championship leaders have signed the young spaniard on a four-and-a-half-year deal, on an undisclosed fee.
Rafa joins up with former Valencia boss Nuno Espirito Santo at the Molineux, and has been awarded the number nine shirt upon his arrival.
It was in fact Santo who gave the talented striker his first game action at Valencia, although he has in fact gone on to make only one more senior appearance.
Rafa has been a goal scoring machine in Valencia’s second team this season, netting 15 goals in 19 games in the thrid tier of Spanish football – and Santo will be hoping that the 20-year-old can help to prolong Wolves’ incredible run of form.
Football Insider verdict:
Although Rafa Mir is relatively unexperienced, he is a talent who has spent time with Barcelona’s academy, and was a reported target for Real Madrid – so you can see how highly he is rated. Teaming up with former boss Santo will only inspire the young Spaniard to impress, and solid game time in the tough Championship division could be just what Mir needs to develop as an out and out Striker.
In other Wolves transfer news, two Wolves youngsters have secured loan moves to a League One club.
We’ve launched a << BREAKING NEWS FEED>> exclusively for your club. ‘Like Us’ on Facebook by clicking here if you want 24/7 updates on all Wolves breaking news.