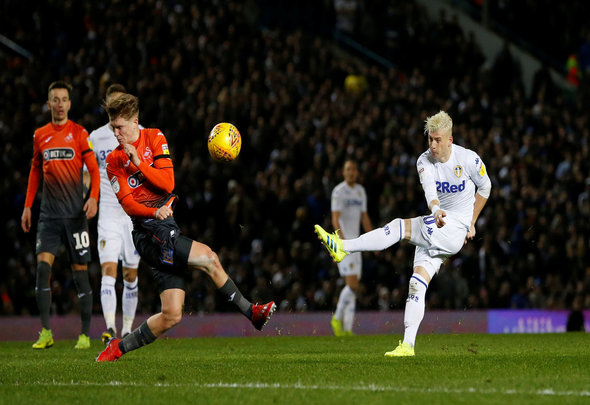 Speaking exclusively to Football Insider, the former Leeds striker and lifelong fan of the Whites says that the Macedonian international has not shown enough quality in a wide attacking role during his time at Elland Road and that he is better suited to playing as a left-sided wing-back.

The 27-year-old was moved back into defence last season by Marcelo Bielsa, having been used as an attacking option following his move from FC Lugano.

However, Whelan insists that 19-year-old Shackleton, who has played as a central midfielder and right-back during his fledgeling career, would be a better option out on the wing, stating that Alioski has proven himself as a better player in defence.

Whelan told Football Insider: “I can only see Alioski playing one position, I don’t see him as a winger, I just don’t. I think there are better players and better wingers there than Alioski.

“I don’t see enough of a winger in him, I think he’s better as a wing-back so that’s the challenge there this season, is who’s going to keep that role. He’s frustrating, drives me up the wall. When he is a winger he gets caught offside too much, when he has the chance to put in a decent ball, he doesn’t put it in the right areas.

“Shackleton – I think he’d be a better winger than Alioski. He goes past players more than Alioski, he puts balls in better than Alioski. Everyone’s going to have a different opinion on Alioski and where his best position is. I saw a better Alioski coming from a deep role last season.”

Alioski has had to settle for two substitute appearances in the Championship this season, Barry Douglas Bielsa’s preferred choice at left-back, although he was handed a start in the League Cup win over Salford City.

Shackleton also featured in the 3-0 victory against the Ammies, starting the game in midfield before moving back to right-back later in the match.

In other Leeds United news, Whelan has told Football Insider that Bielsa absolutely loves working with one player who is like “a kid in the playground.”