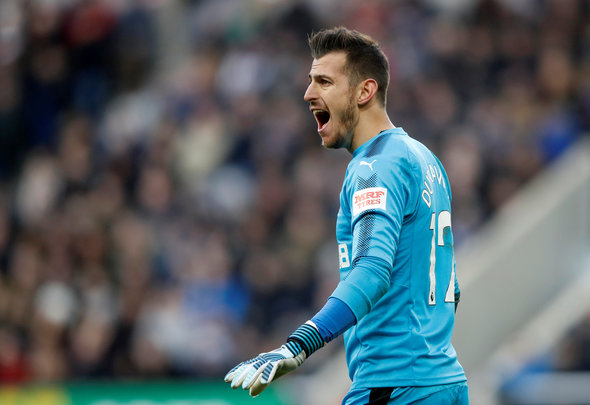 Newcastle United goalkeeper Martin Dubravka has said that his aim during his season-long loan spell is to impress enough to secure a permanent move to the club.
The Slovakian international arrived at St James’ Park in a deadline day deal from Sparta Prague at the end of the January transfer window, and after being named as an unused substitute against Crystal Palace last weekend, was handed his first start when Manchester United visited Tyneside, replacing Karl Darlow.
The 29-year-old played a starring role against the side sitting second in the Premier League table, pulling off a string of impressive saves and instilling a sense of confidence between the sticks as Matt Ritchie’s second half strike secured the three points which lifted the club out of the relegation and into 13th.
Speaking after the game, Dubravka said that he was delighted to have made a winning start to his career at the club, and that his objective for the rest of the season was to prove he had what it take to be a long-term success, with Newcastle having confirmed there is an optional purchase clause in his loan deal.
He told Match of the Day, as relayed on the Chronicle’s live match blog (11/02, 16:57): “It was an amazing game. It was important for us that we got the three points.
“Everybody is super happy. I tried to focus on the game and just think about helping the team in critical situations.
“Let’s see what happens in the summer. I’m trying to show people that I deserve to be here.”
Dubravka will have to battle with both Darlow and Rob Elliot to retain his role in the starting XI, with there now a two week gap between their trip to Bournemouth, who sit three points and three places ahead of the Magpies.
In other Newcastle United news, there was one revelation who was an unsung hero against Manchester United.