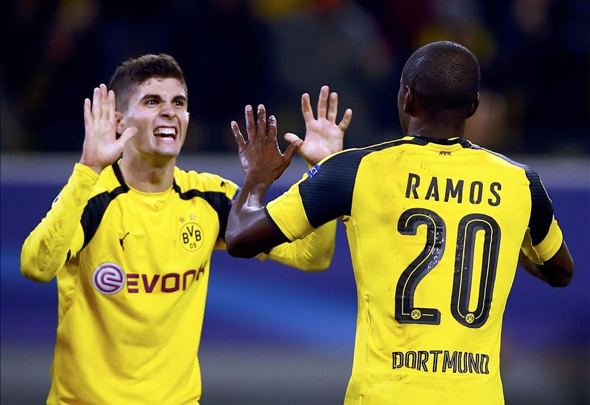 Liverpool have a 10 per cent chance of signing Christian Pulisic from Borussia Dortmund in January, according to a report.

ESPN FC claim that Liverpool are looking to strengthen their team in January following the long-term injury to Danny Ings and the upcoming loss of attacker Sadio Mane to the Africa Cup of Nations.

ESPN claim that according to various reports, Klopp is looking to his former club Dortmund and in particular their exciting 18-year-old winger Pulisic.

Pulisic has notched up two goals and six assists in 12 appearances in all competitions for the Bundesliga side this season, and has already won eight caps for the USA team.

“Having the most exciting American player would certainly be appealing to owner John Henry,” says ESPN FC.

“But it’s highly doubtful that Dortmund would sell Pulisic in January, so the Reds will likely have to wait for the summer to start a formal negotiation.”

The Mail claim that Liverpool had a £14million bid rejected for Pulisic over the summer, but will make another attempt to sign him in January.

The report says that Jurgen Klopp is still keen on the winger but it will take close to £27million to tempt the Bundesliga club into selling the highly rated player.

The Mail report that Pulisic had concerns about his future role at Dortmund in the summer after they bought Ousmane Dembele and Emre Mor.

But this season Pulisic has re-affirmed his value to the Bundesliga side with some important performances and they are even more reluctant to sell.

Pulisic has certainly made an impression at Dortmund, becoming their youngest player to appear in the Champions League and the youngest foreigner to score in the Bundesliga.

In other Liverpool transfer news, the club is 99% likely to agree to this January transfer deal.