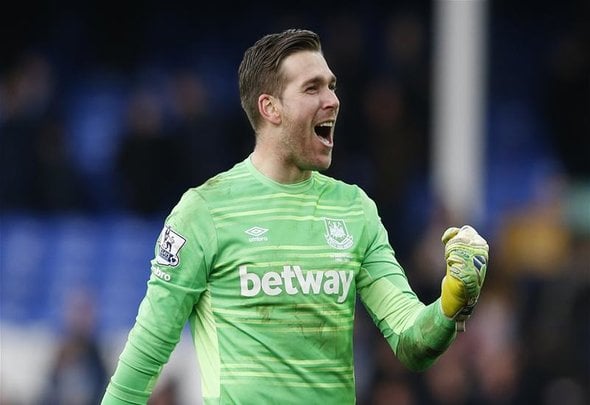 Fenerbahce could be set to sign West Ham goalkeeper Adrian on a free transfer, according to a report.

Adrian’s contract is set to run out next summer, and is free to talk to any non-English clubs in under a month’s time over a potential pre-contract agreement that would see him officially leave in June.

Spaniard Adrian, 29, is reportedly on a list to replace Volkan, with Rennes’ Benoit Costil also on their goalkeeper shortlist.

Now in his fourth season in East London, Adrian has been a huge success for the Hammers after joining on a free transfer from La Liga side Real Betis in the summer of 2013.

Making 117 league and cup appearances during his time at West Ham, Adrian is held in high regard by fans.

However, the Hammers’ number 13 has lost his place to Ireland international Darren Randolph after keeping just three clean sheets in 13 league and cup encounters.

Losing Adrian would be a huge blow to the Hammers defence. Although going through a bad patch of form, the goalkeeper possesses a huge amount of talent which is proved through his 31 clean sheets for the East London side. With many years still ahead of the goalkeeper, West Ham should be looking to offer Adrian a new contract rather than risk losing him on a free. In Randolph, the Hammers have a top-class goalkeeper but he is not considered as good as an in-form Adrian. Losing the uncapped star, then, would prove a huge loss to the Hammers defence as they look to stop the rot at the back. Adrian could be tempted to jump ship though, with Fenerbahce likely to offer Europa League football after Christmas despite a 4-0 loss to Man United.

In other West Ham transfer news, Bilic’s side are braced for a January midfield move.