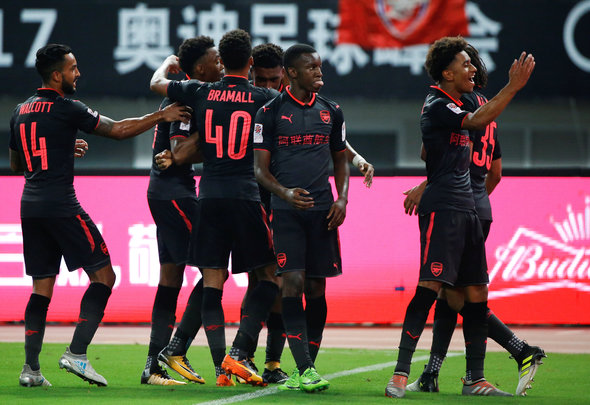 Galatasaray are set to swoop on Arsenal attacker Alex Iwobi before the end of the transfer window in a shock loan deal, according to a report.

TakVim has claimed that the Turkish outfit are hoping to secure the 21-year-old ace within the next week as Galatasaray manager Igor Tudor is keen to recruit a young player who can deliver in the middle.

It is understood that Ergun is considering flying to London next week to ensure a deal takes place.

Iwobi joined the club’s academy as a child in 2004 and has remained at the north London side while working his way through the ranks in a number of positions including on the wing and in an attacking midfield role.

The Nigerian ace moved up to the senior squad in 2015 and has since made a total of 61 appearances across all competitions where he has scored six goals and provided 11 assists.

The homegrown Gunners star featured in the Community Shield victory over Chelsea at the beginning of August as well as the club’s second Premier League game of the season against Stoke City last weekend.

While a season-long loan move usually works well for a young player’s development, this case is slightly different. Iwobi has shown that he develops best at Arsenal, as he’s been with the club for the entirety of his footballing life. Therefore, a move across to Turkey could throw a spanner in the works as he is starting to become a well loved player among the squad, fans and manager Arsene Wenger. Although he didn’t play the full 90 minutes against Stoke last weekend, he showed that he was capable of hold his own among some of Arsenal’s bigger stars. Arsenal should keep hold of the Nigerian and continue to play him throughout the season and review his performance next summer.