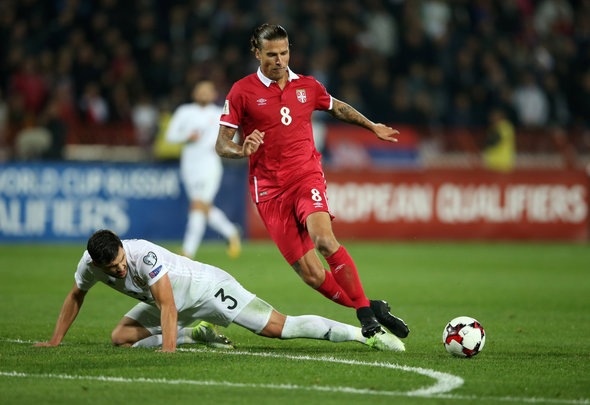 Leeds United target Aleksandar Prijovic is “ready” to make a switch to the Championship, according to a report.

Sportske.net claims that PAOK striker Prijovic, 27, is also being watched by Everton and that he would like to test himself in England.

However it is understood that PAOK are not prepared to cash in on the Serbia international yet due to a 15 per cent sell-on clause that means his former club Legia Warsaw would pick up a bulk of his transfer fee should he leave.

Goal Cyprus has previously reported that Prijovic has a hefty £8.8million release clause tied into his contract with PAOK after signing for the Greek Super League side in January 2017, and should he be sold on to Leeds or Everton for that price, Legia would take £1.3million.

Sportske.net is now reporting that the Championship side have decided they are prepared to pay a fee to sign European striker Prijovic – but not as much as his bulky £8.8million release clause.

The seven-times Serbia international has been in good form this season, netting 10 goals in 20 appearances across Greece’s domestic competitions and the Europa League.

Prijovic has already had one spell in England earlier in his career when he played for Derby, but he never made a senior appearance at Pride Park and had loan stints at Yeovil and Northampton. It would make sense that the Serbian international would want to return to England to have another chance at making it here, but for that sort of fee, it would be a huge risk for Leeds. The money they got from Chris Wood’s sale to Burnley may still be burning a hole in Andrea Radrizzani’s wallet, but that doesn’t mean they should spent it all at once on one player. Prijovic is a journeyman and perhaps won’t spend long at Elland Road should he arrive. However Everton’s interest proves it may be something worth looking into.

In other Leeds United news, the Whites have become tangled up in a £70million Premier League transfer saga as a top-flight side eyes up a swoop for this Elland Road star.