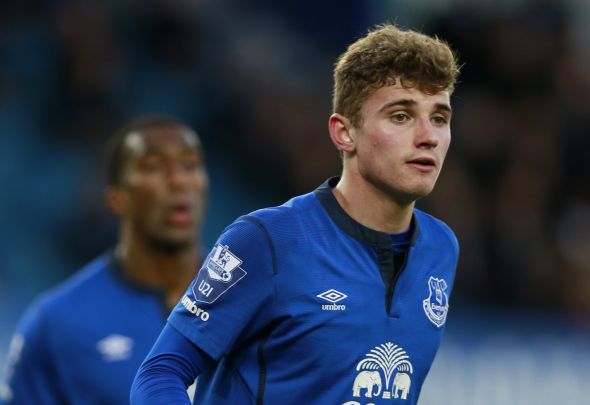 Oxford and Portsmouth have registered an interest in Everton midfielder Ryan Ledson, according to a report.

The Liverpool Echo claim the 19-year-old academy product has caught the eye of lower league clubs after an impressive stint with Cambridge last season.

It is said that Ledson has been offered the chance to leave Goodison Park on a permanent deal as the club prepare to sell him.

Ledson was on loan at Cambridge between November and April, and in that time made 27 appearances.

He was also part of the England squad that reached the semi-final of this summers Under-19s European Championship in Azerbaijan.

The young midfielder was given his Toffees debut in 2014 by then manager Roberto Martinez when they faced Krasnodar in the Europa League, but two years on that remains his only first-team appearance.

Everton are undergoing changes at Goodison Park, following the exit of Martinez at the end of the season and the arrival of Ronald Koeman from Southampton.

Their marquee signings have been Yannick Bolasie and Ashley Williams, who was brought in as a direct replacement following the £47.5million sale of John Stones.

A major priority for the Merseyside giants has been to retain star striker Romelu Lukaku, and it appears they have done just that.

Koeman claimed in a column last week that Lukaku had come to him and said he wanted to stay at the club, as well as noting the decision was equivalent to a big summer signing.

“Ten days before the transfer deadline he came into the manager’s office and said he was no longer leaving and had decided to stay at Everton,” Koeman wrote in his column in Dutch newspaper De Telegraaf, as quoted by the Sky Sports website.

“His decision is the same value as a big money transfer. He is not only a good player but a fine person. He lives his football in the fashion that you would want a top footballer to.”

In other Everton transfer news, they have intensified their striker pursuit following talks on Tuesday with a top-tier club and are ready to meet £21.5million asking price.