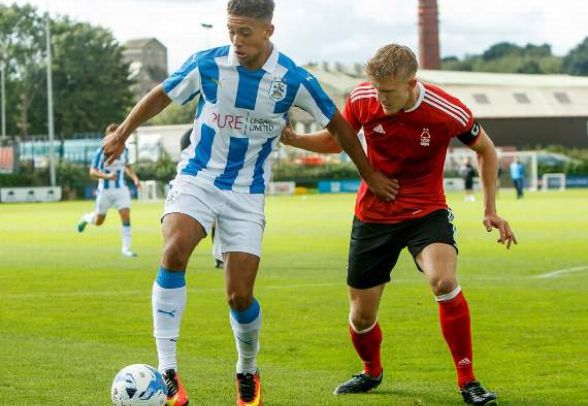 Everton are monitoring Huddersfield teenager Rekeil Pyke despite a goalless loan with League Two outfit Colchester last term, according to a report.

The Sun claim the 19-year-old forward has been identified as a possible summer signing by Toffees boss Ronald Koeman, who is known for his faith in youth at Goodison Park.

It is believed that Koeman has kept an eye on Pyke’s development for a few months, and although he failed to score for Colchester, he impressed U’s manager John McGreal.

McGreal, 44, was quoted by the Sun as saying the former Wrexham forward is a “beast of a kid” as Pyke quickly gained a reputation for his powerful, robust style of play up front.

Pyke made 15 appearances in all competitions for Colchester, as the fourth-tier outfit finished in eighth place and just two points outside the League Two play-offs but failed to score.

Merseyside outfit Everton are known for their faith in youth, having blooded academy products Tom Davies, Dom Calvert-Lewin and Mason Holgate into the first team this season.

Following the appointment of director of football Steve Walsh, the Toffees have also brought in teenage attacker Ademola Lookman from Charlton for £11million in January.

Pyke has just one month left on his contract at the John Smith’s Stadium, with his future under David Wagner unclear and he could be the latest youngster to sign for the Toffees.

Pyke’s inability to score for Colchester this season is a cause for concern that Koeman should consider if he is to attempt to pen the signature of the young striker in the summer. However, Pyke is the kind of forward who is known more for contributing to play rather than finding the back of the net himself, and that could be enough to convince Koeman to give him a chance. However, he will have his work cut out in trying to work his way into the Everton first team, with Romelu Lukaku the Toffees’ undisputed first-choice striker after scoring 24 Premier League goals last season. Koeman must weigh up if a move for Pyke is worth it, ahead of the summer window.

In other Everton transfer news, this Toffees striker is set to leave this summer with a Turkish club reportedly interested in signing him on loan.