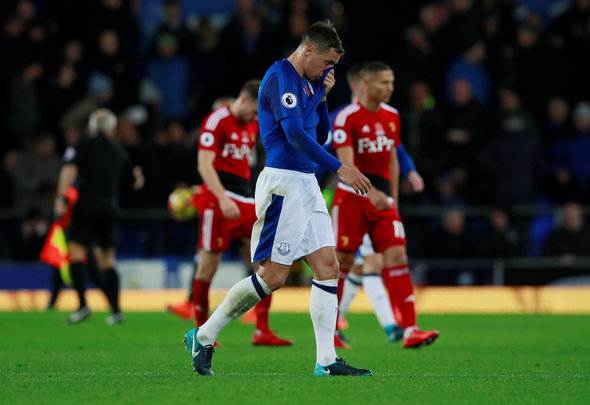 Everton fans on Twitter were not happy with the performance of captain Phil Jagielka in Sunday’s 3-2 win against Watford at Goodison Park.

The Toffees faithful took to social media to destroy the 35-year-old after they largely saw him as being at fault for their side going two goals down to the Hornets.

After a goalless first-half, Richarlison and Christian Kabasele put Watford ahead before a stunning comeback in the final 23 minutes that saw Oumar Niasse, Dominic Calvert-Lewis and Leighton Baines all find the target for David Unsworth’s side.

Tom Cleverley missed an injury-time penalty for the visitors, meaning that Unsworth would go on to win his first game in caretaker charge of the Merseyside club.

However, although the result was a huge plus-point in what has been a difficult season for Everton, fans were left fuming with the display of Jagielka in the heart of defence, with one supporter saying that the senior player is “stinking the place out”.

Jagielka absolutely stinking the place out there. Baines not fast enough across and Pickford with almost a Howard type calamity.

Really what has happened to Jagielka. There's losing pace and there's getting turned consistently.

Niasse man of the match, didn't give up and lead our fight back. Questions need to be asked about Jagielka and Keane's mentality. #EFC

Jagielka though is the worst captain of Everton I’ve ever seen. He just accepts everything the ref gives.

"Gets the better of Jagielka again"

Jagielka has made 11 appearances across all competitions for Everton this season and in those games he has only played in two wins, against Stoke and Watford.

The Toffees have played 10 games with the ex-Sheffield United defender this season and in those matches they have won four times, suggesting that they are a much better team without their captain on the pitch.

In other Everton news, a BBC pundit has claimed that the Toffees should have made an approach for this Premier League manager by now – but it’s not Sean Dyche.