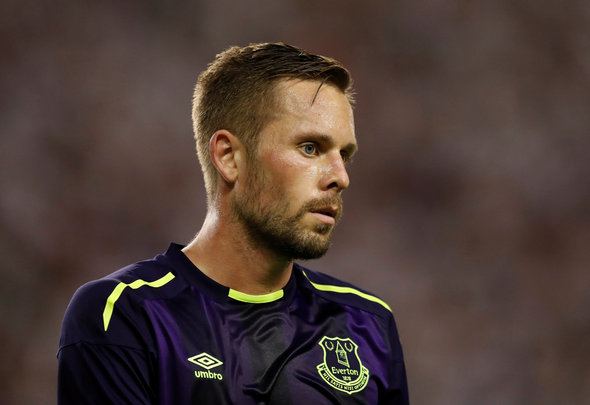 Everton fans on Twitter have torn Gyfli Sigurdsson to shreds for another poor performance in Sunday’s 5-2 loss to Arsenal at Goodison Park.

Sigurdsson, 28, was Ronald Koeman’s number one transfer target in the summer, but since leaving Swansea in a stunning deal worth £40million, the Icelandic attacker has done very little to prove his price-tag – and that was again the case on Sunday, according to the supporters.

Nacho Monreal, Mesut Ozil, Alexandre Lacazette, Aaron Ramsey and Alexis Sanchz all got themselves on the scoresheet for Arsenal, ruling strikes from Wayne Rooney and Oumar Niasse as futile in a poor display from the Evertonians.

Sigurdsson had been on fire for the Swansea before his summer switch but is yet to reach anywhere near those heights on Merseyside, having failed to have supplied an assist or score a goal in the Premier League.

Everton fans didn’t hold back in their criticism of the ex-Tottenham ace on Twitter, with one calling the player “garbage”.

Sigurdsson offering nothing so far, I'd have him off for Mirallas or Lookman

Agree, Sigurdsson pretty anonymous so far. Arsenal looking uncertain at the back, we need to be bolder. Lookman?

The signing of attacking midfielder Sigurdsson is perhaps a large part as to why Ronald Koeman has found himself under such intense pressure lately after a poor start to the campaign.

Despite splashing the cash in the summer on revamping his squad, Koeman has overseen an extremely poor start to the 2017/18 season, with his side floundering in the lower reaches of  the Premier League as well as looking as though they are on the verge of exiting the Europa League.

In other Everton news, the Toffees are facing a tough transfer decision as two European giants eye up a £14million swoop for one of their attackers.