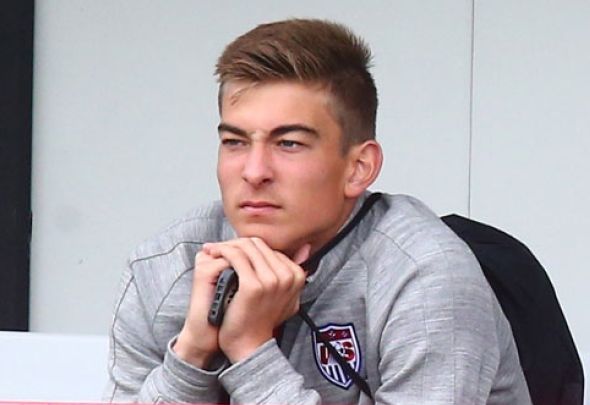 Everton have given Jurgen Klinsmann’s son Jonathan a trial at Finch Farm after a string of top displays for USA’s Under-20’s side, according to a report.

The Daily Mail claim the 19-year-old goalkeeper has caught the attention of Toffees chiefs after winning the Golden Glove at the CONCACAF Under-20 Championships earlier this month.

Jonathan, who saw his father sacked as USA manager back in November, has both American and German passports and will link up with the Toffees next week.

The youngster currently plays for California University, where he has won rave reviews for his performances between the sticks.

Klinsmann, who also has six caps for USA’s Under-18’s side, is currently in London with his country’s Under-20 side on a training camp.

Fans will be hoping that the teenage goalkeeper can live up to his father’s lofty success in football if he does sign a permanent deal with the Toffees, with Germany all-time great Jurgen winning the 1990 World Cup and two UEFA Cups during his glittering career.

Klinsmann senior also had two memorable spells at Tottenham during his own playing days.

Everton’s desire to buy young in the transfer market and place their faith in youth has so far paid dividends. Bringing in former Charlton attacker Ademola Lookman has proved to be an inspired signing, after the £11million teenager scored on his Toffees debut during the 4-0 win against Man City. Tom Davies, Mason Holgate and Dom Calvert-Lewin have all proved that they have enough quality to star in their side’s first team in the Premier League, with the latter also finding the back of the net last time out against Hull. With Everton’s youth academy continually churning out top talents such as these, Klinsmann will be able to reach the fullest of his potential should he impress during his trial, enough to earn a permanent deal at Goodison Park.

In other Everton transfer news, Koeman is pursuing this midfield enforcer reportedly worth £25.8million.