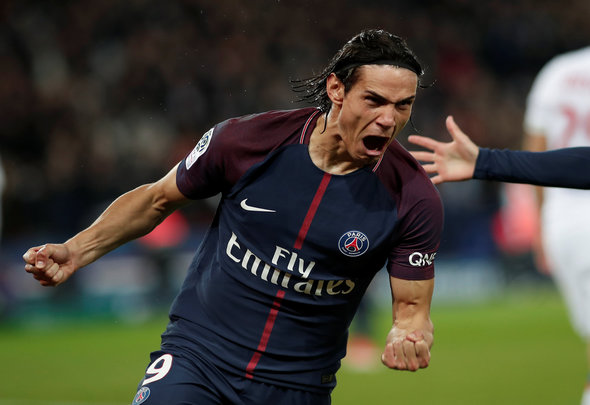 Everton are one of a number of top teams interested in Paris Saint-Germain forward Edinson Cavani after his on-pitch fall out with summer signing Neymar, according to a report.

The Daily Mail claims that Juventus, Inter Milan, Napoli and Chelsea are also keeping tabs on the Uruguayan international’s situation at PSG after he argued with Neymar over who would take a penalty in the Ligue 1 clash with Lyon on Sunday.

Everton are now said to have been alerted the 30-year-old striker’s situation in Paris but face a number of difficulties if they would want to convince him of making a move to Goodison Park.

Cavani is reported to be earning a stunning £120,000-a-week after tax with European giants PSG, however the French club are under pressure to sell some of their players soon due to Financial Fair Play.

It is understood that the powerhouse striker, known for his commanding physical presence in the box, would also want Champions League football – which looks unlikely for Ronald Koeman’s side at this early stage of the season.

Cavani would be one massive signing for Everton, but realistically, it will never happen. A player of his quality should always be playing for a team that is on top and Everton’s start to the season shows that they are nowhere near the big boys in the Premier League. Cavani’s wages are also monumental and the Toffees would probably have to break the bank and offer him more money in order to convince him to get up Champions League football and regular silverware. Koeman does need to find a replacement for Romelu Lukaku in January because Sandro Ramirez and Wayne Rooney are not going to fill the void.

In other Everton news, a manager has said that he hopes the Toffees don’t play with 23-year-old on Wednesday.