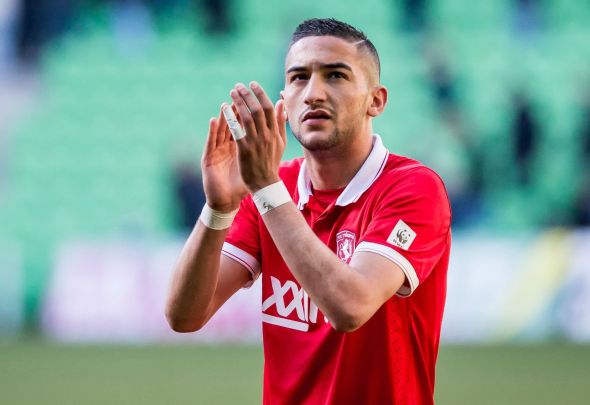 Everton face a battle with Inter Milan and Ajax to sign FC Twente attacking midfielder Hakim Ziyech, according to a report.

The Morocco international is one of the hottest young properties in European football after scoring 17 league goals and supplying a further 12 assists in the competition last season.

Dutch newspaper De Telegraaf claims that Everton and Inter have bid £8.6million for the 23-year-old after managers Ronald Koeman and Frank de Boer were convinced by his exceptional qualities.

It is said that a transfer for the former Heerenveen playmaker, who is also the subject of interest from Spain, Russia, Turkey and Portugal, is imminent.

FC Twente’s number 10 has two years remaining on his De Grolsch Veste deal, but the versatile attacker could be set for a move to one of Europe’s big boys after an impressive season.

Since signing for Twente, the Netherlands-born attacker has scored almost one goal every two games from midfield, finding the back of the net 32 times in 72 appearances.

Ziyech can play as a shadow striker or as a playmaker in the number 10 role, and has is also known to play on the right of midfield or of a front three.

The attacking midfielder decided to play for Morocco despite representing the Netherlands at under-21 level, making his international debut in October 2015 against Ivory Coast.

In other Everton transfer news, this £17million target has been told that he will be offered a new contract.