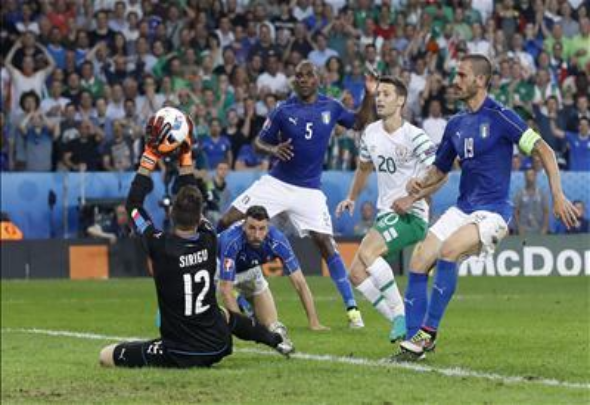 Everton have made contact with the advisors of Paris Saint-Germain goalkeeper Salvatore Sirigu, according to a report.

French news outlet Le Parisien claim that the Toffees are looking at Sirigu, alongside Premier League rivals Hull and La Liga side Sevilla.

It is believed that the Spanish side lead the race with a reported loan deal for the 29-year-old, as they’re able to offer the Italy international Champions League.

However, the competition for the shot-stopper’s signature remains on and the goalkeeper’s advisors revealed that a deal with Sevilla is not yet complete.

“The deal is not yet completed with Sevilla, but we hope the situation will be clarified in the next few days,” said the Sirigu’s representatives to Le Parisien.

The experienced goalkeeper moved to France from Palermo in the summer of 2011.

The 17-time capped Italy international has two-years left on his contract and has played in 190 fixtures during his time at the cash-rich club, winning four Ligue 1 titles.

However, Sirigu has been left out of Unai Emery’s opening two matches of the new campaign behind Kevin Trapp and Alphonse Areola, after making just six appearances for the club last season.

Ronald Koeman is keen to add another goalkeeper to his squad to compete alongside Maarten Stekelenburg.

This follows reports that the Dutch boss was reportedly keen on taking Joe Hart from Manchester City. However, the Mail claimed on Monday that the Toffees have decided against signing the England international because of the cost of bringing him to Goodison.

In other Everton transfer news, Toffees target Jose Fonte will not be leaving Southampton this summer.