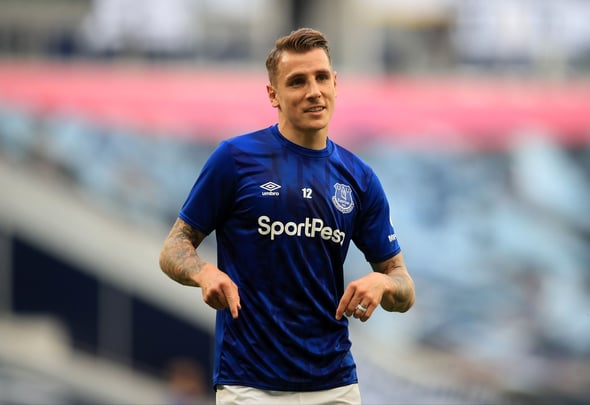 Everton are sending a clear tittle message to their rivals with Lucas Digne’s new contract.

That is according to ex-Premier League goalscorer Kevin Phillips, speaking exclusively to Football Insider after the former Barcelona man put pen to paper on a new deal on Wednesday.

The 27-year-old was linked with Manchester United and Manchester City among others and fans will no doubt be delighted to see him commit his future to the club.

The Mirror reports that the Frenchman’s new four-year contract is thought to be worth around £100,000-per-week.

Digne’s fresh deal is a real statement of intent, claims Phillips, and the Toffees may soon be challenging consistently for the top-six, European football and beyond.

He told Football Insider correspondent Dylan Childs: “It sends out a real message to Europe and the Premier League, as well as the Everton supporters. They’re saying: ‘We’re serious here, serious about pushing for European spots and eventually maybe the league.’

“You need to keep your best players and he’s certainly one of those for Everton. I’ve said all along, when a player signs a new deal, you’re delighted as a manager and a club.

“You can forget about that position, that’s sorted for the next two, three, four years. You might bring someone in to challenge him, of course.

“But when you can get a quality player like that tied down, for the Everton fans and the board it’s brilliant.”

Liverpool joined Everton from Barcelona for £18million in August 2018.

He has gone on to make 97 appearances, registering 19 assists and chipping in with five goals in that time.

In other news, a top pundit has hailed an “outstanding” Everton player who made 13 clearances in Saturday’s historic victory over Liverpool.